Over a dozen anti-lockdown protesters were arrested Saturday in Melbourne, as those deliberately flouting stay-at-home orders clashed with Australian police. 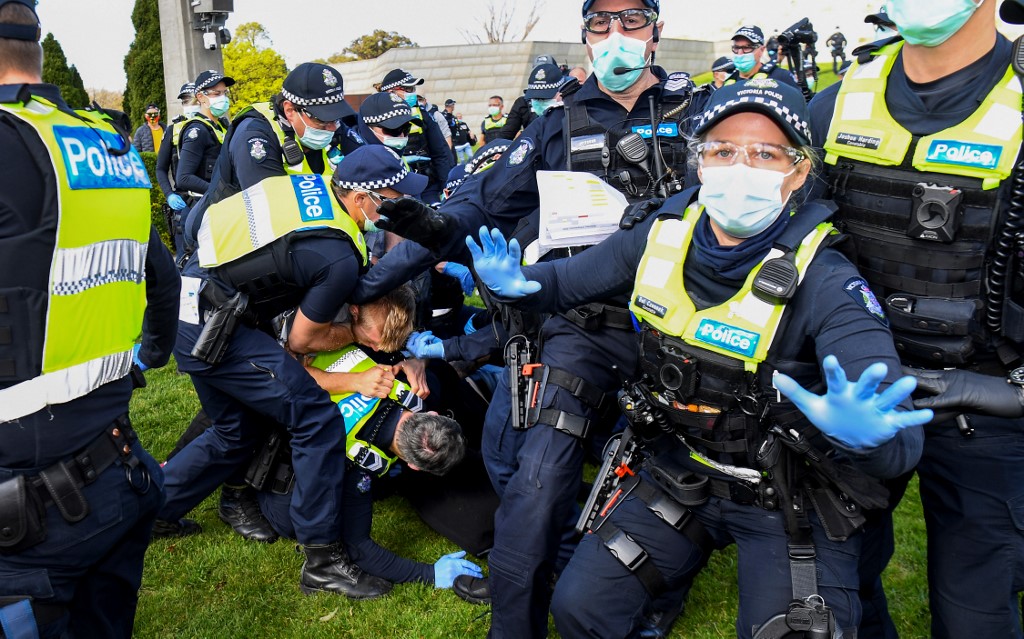 Police tackle protesters in Melbourne on September 5, 2020 during an anti-lockdown rally protesting the state's strict lockdown laws as a preventive measure against the COVID-19 coronavirus. (Photo: AFP)

A huge police presence responded, arresting 17 as the crowd chanted "freedom" and "scam" towards lines of officers who repeatedly attempted to move people on.

Two protesters were seen raising their arms in a Nazi salute at officers and yelling "Heil Dan", comparing the state of Victoria's premier Daniel Andrews to Adolf Hitler, while standing on the forecourt of the Shrine of Remembrance -- a war memorial which partly commemorates Australians killed fighting in World War II.

Demonstrators moved to a nearby park before being surrounded by police and eventually dispersing.

Officers said they issued 160 fines for breaching health orders and were expecting to hand out more in coming days.

Several attendees told AFP they were protesting the government's response to the pandemic, which has killed more than 865,000 people around the world, labelling it overblown or an outright "scam".

"We are in a city where the cure from Daniel Andrews is actually worse than what's happening," protester Fiona Kat said.

Rallies were also held around the country, with 14 people arrested at protests in Sydney and Byron Bay.

Despite Victoria's second wave, Australia has dealt relatively well with the virus allowing the rest of the country to roll back restrictions.

Before the protest, Victorian premier Andrews told people to stay home and warned the gathering could jeopardise a path out of lockdown, which is expected to be outlined on Sunday.

"In fact, it is absolutely selfish."