Demonstrations raged for a second day in Spain's Catalonia region and spread to the country's capital Madrid following the arrest of outspoken rapper Pablo Hasel on Tuesday. (Photo: AFP)

Protests against the jailing of left-wing rapper Pablo Hasel continued for a second night in Spain as rallies spread to other parts of the country, including the capital Madrid on Wednesday.

Police clashed with hundreds of demonstrators who had gathered in the capital's central Puerta del Sol square, calling for 32-year-old Hasel to be released and holding banners reading "enough censorship."

Some protesters were seen hurling bottles at police, who charged at them in clashes lasting several hours. Around 50 people were arrested overnight in the altercations, while the city's emergency services said 55 people were injured, among them 35 police officers.

Madrid's conservative mayor Jose Luis Martinez-Almeida condemned the incidents, tweeting: "The violent and those who do not accept the rules have no place in our society." 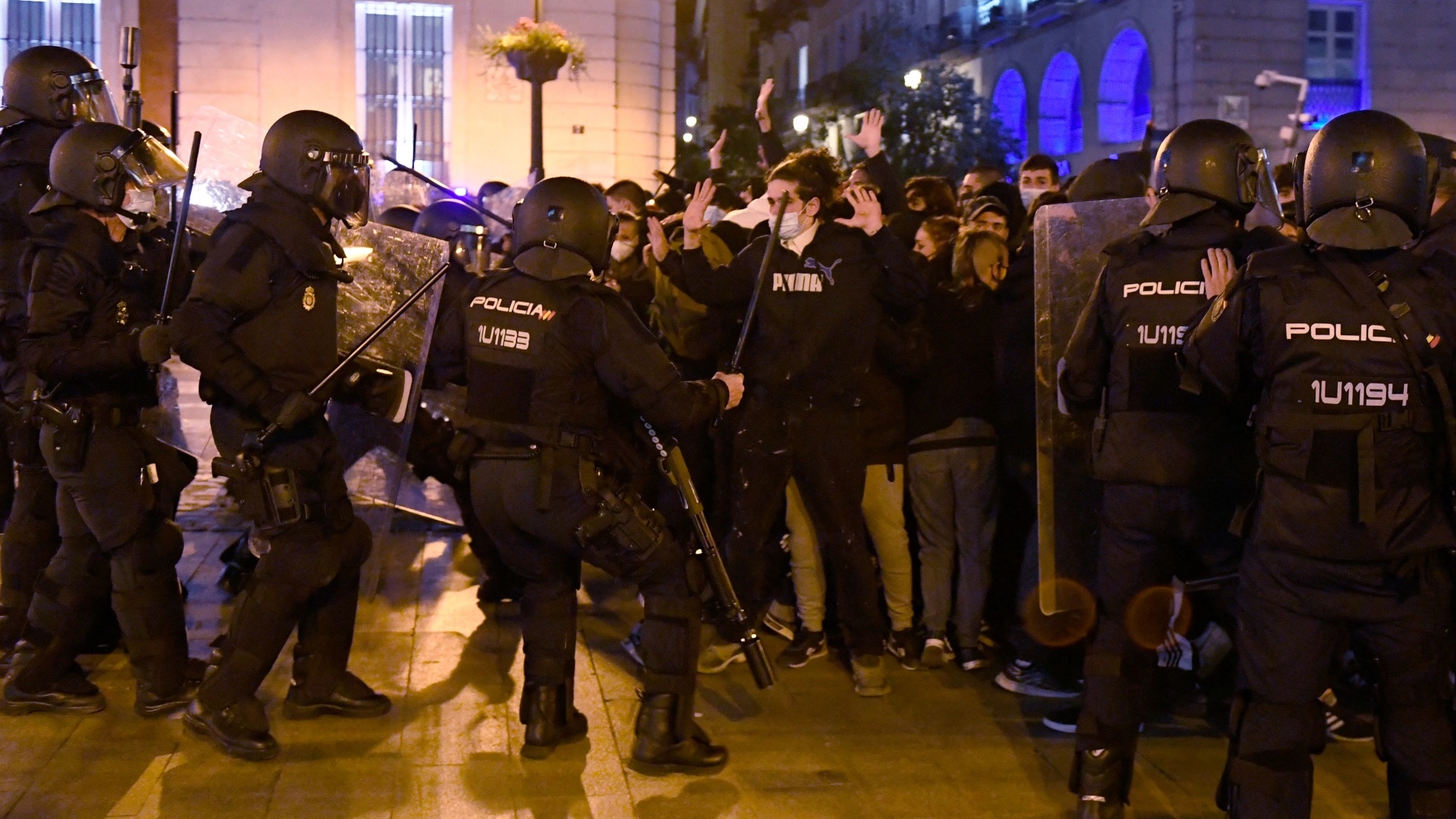 Spanish police clashed with protesters in Madrid as some hurled objects at police while officers charged at them. (Photo: AFP)

Demonstrations also raged in Barcelona as some threw objects at police and set barricades ablaze, with police firing foam rounds and charging at the protesters.

Across Catalonia, the Mossos d'Esquadra regional police said 31 people were arrested, including 10 in Barcelona, 14 in Lleida, where Hasel was arrested, five in the northern city of Girona and two in Tarragona in the northeast. Medics said eight people were slightly injured.

Angry protests first erupted on Tuesday night in Barcelona and other Catalonia regions after police detained Hasel, who had been holed up in a university in Lleida to avoid his nine-month jail sentence, handed down in 2018.

At issue were his lyrics and a series of tweets that included references to the Basque separatist paramilitary group ETA, compared Spanish judges to Nazis, called former King Juan Carlos a mafia boss and accused police of torturing and killing demonstrators and migrants.

Hundreds of protesters gathered in the capital Madrid and other parts of Spain demanding the release of jailed rapper Pablo Hasel. (Photo: AFP)

Hasel's sentence caused outrage in Spain, with campaigners saying that prosecuting him was a dangerous assault on free speech. Hundreds of artists including the filmmaker Pedro Almodovar and the Hollywood actor Javier Bardem, also expressed support for his cause and lobbied for his release.

Amnesty International said jailing the rapper for song lyrics and tweets was "unjust and disproportionate."

The case spurred discussions about Spain's "gag laws" and freedom of speech in the country. In response, Spain's leftist government said last week it would reduce the penalty for "crimes of expression," such as the glorification of terrorism, insults to the crown and offenses against religious sensibilities in the context of artistic, cultural or intellectual activities.

The government said it would introduce milder penalties, target only actions that pose a risk to public order or might provoke violence, and would uphold tolerance for artistic, cultural and intellectual forms of expression.