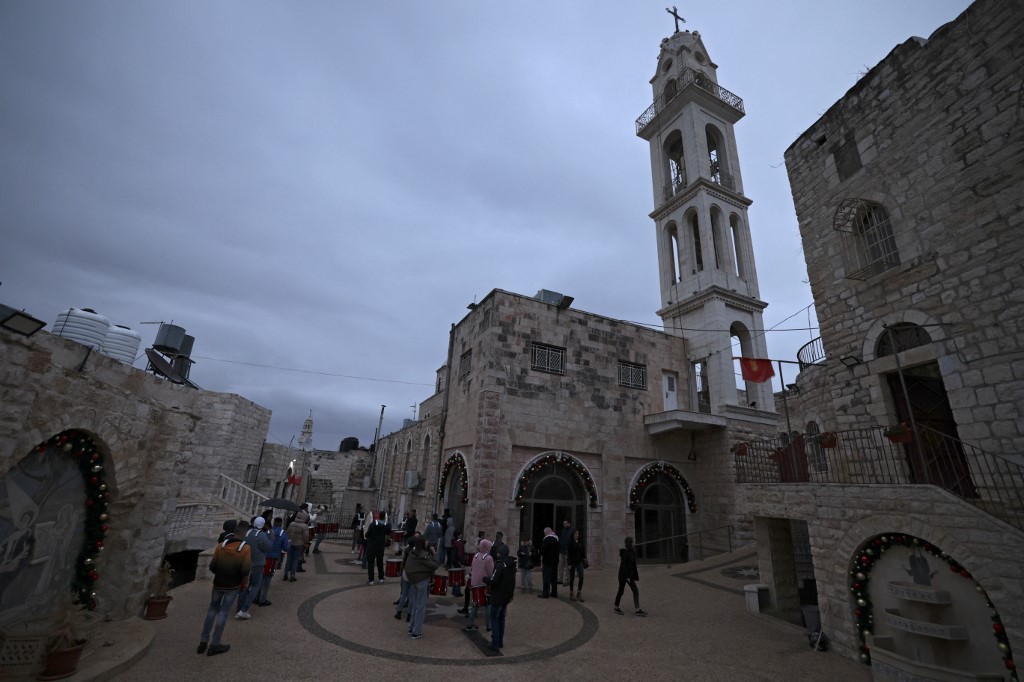 People walk past the Church of the Nativity, revered as the site of Jesus Christ's birth, ahead of Christmas in the biblical city of Bethlehem in the Israeli occupied West Bank on December 23, 2021. (Photo: AFP)

RAMALLAH, Dec. 23 (Xinhua) -- Dozens of Palestinian protestors were injured on Thursday in clashes with Israeli soldiers in a village northwest of the West Bank city of Nablus, Palestinian medics and eyewitnesses said.

42 Palestinians, including a local journalist, were injured by rubber-coated metal gunshots and 83 others suffered from suffocation after inhaling tear gas fired by the Israeli soldiers in the village of Burqa, northwest of Nablus, the Palestinian Red Crescent Society said in a statement.

Eyewitnesses in the village told Xinhua that clashes between the demonstrators and the Israeli soldiers broke out earlier on Thursday. They added that the protestors organized a demonstration against Israeli settlers' assaults and expansion of settlements.

The clashes broke out in the village shortly after hundreds of Israeli settlers, under the protection of Israeli soldiers, attempted to break into the village, the Palestinian official news agency WAFA reported.

In the past few days, the tensions between Israel and the Palestinians have been flaring in the West Bank over the Israeli measures. Two Palestinians were killed on Tuesday and Wednesday.

Meanwhile, Saleh al-Arouri, deputy chief of the Islamic Resistance Movement (Hamas) told the pro-movement Al-Aqsa TV channel that there is a clear ascending trend of tension in the West Bank as a result of the Israeli occupation practices.

The Palestinians want to establish an independent Palestinian state alongside Israel on all the Palestinian territories occupied by Israel in 1967, including the entire West Bank and the Gaza Strip, with East Jerusalem as its capital.