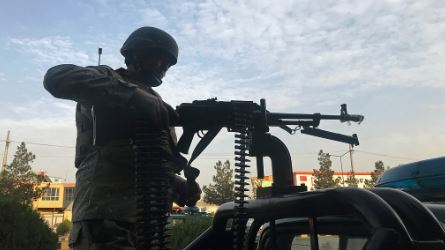 An Afghan policeman keeps watch near the site of a blast in Kabul, Afghanistan, July 28, 2019. (Photo: VCG)

23 were killed and 50 others injured in a powerful explosion and a subsequent gun attack in the Afghan capital of Kabul, targeting the office of the president's running mate, Amrullah Saleh, officials said on Monday.

It was reported that Saleh was wounded by shrapnel before being evacuated from the office. Photographs shared by a government official showed him sitting in a garden with blood stains on his right arm, surrounded by security guards.

Ferdous Faramarz, a spokesman for Kabul's police chief, said the explosion on a road near the private Ghalib University was likely a suicide car bomb. Immediately after the blast, gunmen stormed a nearby building belonging to Saleh's Afghan Green Trend Party.

No militant group has claimed responsibility so far, but both the Taliban and ISIL have carried out attacks in the past in Kabul. However, the two armed groups are sharply divided over ideology and tactics, with the Taliban largely confining its attacks to government targets and Afghan and international security forces.

Saleh, a former Afghan spy chief turned politician, is an uncompromising opponent of the Taliban and other hardline Islamist groups. He led the country's National Directorate of Security until 2010. President Ashraf Ghani said that Saleh was unharmed during the “complex attack” targeting the Green Trend party headquarters.

Ghani said in a tweet: "My brother, true son of the Afghan soil and first VP candidate of my electoral team, Amrullah Saleh, has survived a complex attack by enemies of the state. We are relieved and thank the almighty that the attack has failed.”

Ghani, Saleh and more than a dozen other Afghan politicians, launched their two-month presidential election campaign on Sunday which was marred by the large bomb and gun attacks, underscoring the risks facing the presidential election, which is scheduled for September 28 but has already been delayed twice this year.

The elections have become closely intertwined with the peace process although the Taliban steadfastly refuse a direct talk with Afghan government, which it considers as illegitimate. The Taliban insisted that any new talks would only begin after a deal has been forged with the US in which the US needs to draw up a schedule for withdrawing its 14,000 remaining troops now stationed in the country.