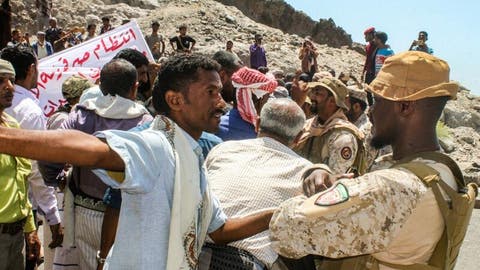 In protest against the deterioration of the country's economy, lack of basic services and poor living conditions, the protesters gathered near the presidential palace and then stormed the whole building, the local official said on condition of anonymity.

He said that the protesters were demanding the Saudi-backed Yemeni government chaired by Prime Minister Maeen Abdulmalik to stop the sharp collapse of the country's national currency.

Units of the presidential guard troops charged of protecting the government failed to disperse the angry protesters who forced their way into the palace, the official said.

All the government members including the prime minister were evacuated by troops of the Saudi Arabia-led coalition to another safe location in Aden, according to the official.

Local residents said that heavy security troops were dispatched later to the area around the presidential palace following the demonstration.

In the street markets in Aden, where the Saudi-backed government is officially based, 1 U.S. dollar was traded for 903 riyals, up from 215 riyals compared with the rate before the war's eruption in 2015.

The sharp decline in the Yemeni currency's value started to severely affect the people who are already coping with the deteriorated situation caused by the years-long war.

The United Nations World Food Program (WFP) in Yemen warned in December 2020 that the riyal had lost 250 percent of its value since the start of the war in 2015, which has led to an increase in food prices by 140 percent.

In 2017, the Yemeni government floated the national currency, a move that economic observers and analysts said was not well-studied a year after the relocation of the Central Bank to Aden.

The Yemeni economy is continuing to suffer after all exports were halted following a blockade on the country, which was part of a Saudi-led military intervention in March 2015. The blockade has also restricted imports largely.

All investments, including oil and gas projects, whose revenues used to contribute more than 70 percent of the state budget, were shut down.

Flow of foreign cash has stopped almost completely and corruption within government institutions is among problems deepening economic misery.