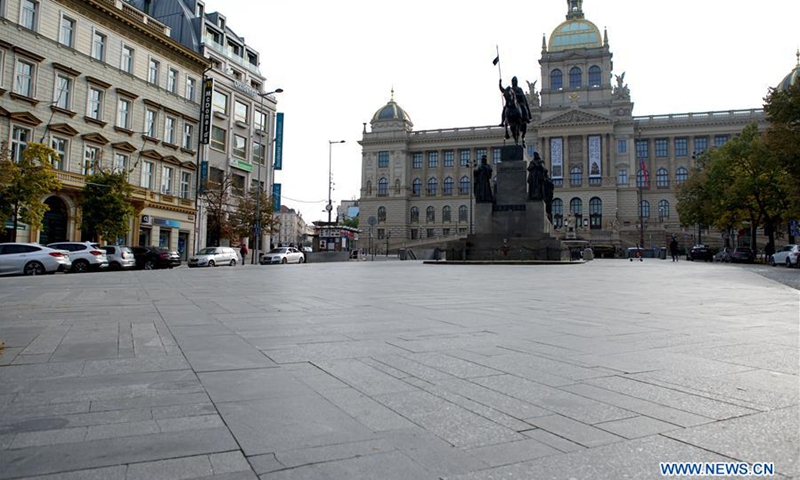 The Wenceslas Square is nearly empty amid a lockdown to curb the spread of COVID-19 in Prague, the Czech Republic, Oct. 22, 2020. The Czech government on Wednesday decided to close most shops and services in the country and strictly restrict the movement of residents as of Thursday to curb one of the world's fastest growing COVID-19 infection rates. As part of the new measures, which will remain in force until Nov. 3, assemblies of more than two people who are not in the same household or work together will be banned. (Photo:Xinhua)

It is no secret that the Democratic Progressive Party (DPP) authority of the island of Taiwan have wooed some countries' politicians who seek political interests with anti-China gimmicks to create the illusion that Taiwan is gaining support in the world. The DPP authority does so in a bid to deceive and benumb the Taiwan people for its secessionist goal. However, only the DPP authority and those politicians living on anti-China approaches can benefit from such a political maneuver. Ordinary people are the ones who have to bear the consequences of politicians' crossing the red line of the one-China principle.

According to media reports, Joseph Wu, head of the external affairs authority of Taiwan, will visit the Czech Republic for a meeting on October 27 and 28. Before Wu's trip, a business delegation from the island of Taiwan will attend a meeting on high-tech cooperation from October 23 to 26. The delegation is reportedly slated to visit Slovakia and Lithuania. The arrangement was described as the latest sign of "warmer relations" between the Czech Republic and the island of Taiwan.

The Chinese government is not opposed to any country developing economic, social and cultural cooperation with the island of Taiwan, because this serves the well-being of the Taiwan people, Xin Qiang, deputy director of the Center for American Studies at Fudan University, told the Global Times.

But if Wu's visit pushes through, it will be a blatant challenge to the one-China principle.

"China will take firm measures in response. A downgrade in relations between China and the Czech Republic might be inevitable. The visit will negatively affect the situation across the Taiwan Straits. It is also possible that more Chinese People's Liberation Army's aircraft will be sent to areas around Taiwan more frequently," Xin noted.

In the past months, the three European countries had petty moves in regard to the Taiwan question. The disintegration of the Soviet Union and the drastic changes in Eastern Europe had left some people in some of these countries with a deep-rooted anti-communist sentiment. The malicious politicians in some of these countries take advantage to play up ideological antagonism to gain power. They have been deceiving people that supporting Taiwan is supporting the so-called democracy and that challenging the Chinese mainland is challenging the so-called autocracy.

In fact, the three countries are more closely connected in economy, trade, and diplomacy with the Chinese mainland than with the island of Taiwan. But these politicians are completely lost to their greed for political support and more votes at home. The DPP's collusion with these politicians is a political farce designed for their own selfish interests and has no practical significance. The DPP authority is aware of this.

The island's exports to the mainland in the first nine months of the year have already reached $140 billion, or 42.7 percent of its total exports. As a comparison, the island's exports to the US, which the DPP authority sees as a backer, was only $47 billion in the same period. The DPP authority knows the consequences of provoking the mainland too much. But they are playing with fire soliciting foreign support while continuing to test the waters with salami-slicing tactics.

The Taiwan authorities have used "dollar diplomacy" to woo some unscrupulous politicians. But to their countries, such an amount of money means nothing. Take the Czech Republic. In 2019, the Eastern European country's exports to the island of Taiwan was about $259 million, but $2.4 billion to the Chinese mainland.

The Chinese mainland has become the second largest trading partner of the Czech Republic and its largest outside the EU. There are broad prospects for the two countries in future cooperation. It is in the interest of both countries to maintain and develop their relations. This is the same case with other countries that have tried to use the Taiwan question to sound China out.

China is not opposed to countries developing normal cooperative relations with the island of Taiwan. But if they cross the bottom line of the one-China principle, they must pay the corresponding price. At that time, how can selfish politicians, who harm their own countries' national interests, continue their wishful thinking?