WORLD DPRK FM: Denuclearization is premised on its trust in America

DPRK FM: Denuclearization is premised on its trust in America 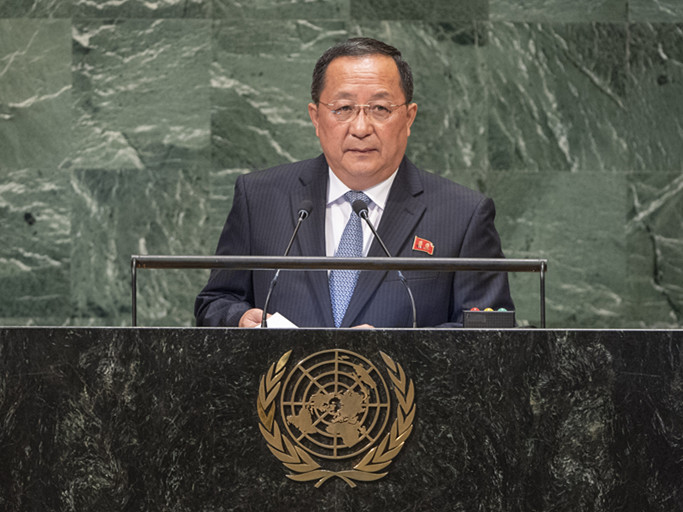 New York (People’s Daily) – "North Korea needs more trust in the US and their developing relationship before it will get rid of its nuclear weapons," Ri Yong-ho, the Foreign Minister of the Democratic People's Republic of Korea (DPRK), said on Saturday in a speech at the 73rd session of the UN General Assembly.

"Without any trust in the US, there will be no confidence in our national security, and under such circumstances there is no way we will unilaterally disarm ourselves first," Ri said, adding that the DPRK's commitment to disarming is "solid and firm," but that trust is crucial.

More than three months after a June summit in Singapore between the US and DPRK leaders, Ri told world leaders at the UN General Assembly that the DPRK doesn't see a "corresponding response" from the US to DPRK's early disarmament moves. Instead, he noted, the US is continuing sanctions aimed at keeping up pressure.

"The perception that sanctions can bring us to our knees is a pipe dream of the people who are ignorant of us," he said, adding that the continued sanctions are "deepening our mistrust" and deadlocking the current diplomacy.

The key to consolidating peace and security on the Korean Peninsula is to thoroughly implement the joint statement adopted at the historic summit between the DPRK's leader Kim Jong-un and US President Donald Trump in Singapore in June, said Ri.

The joint statement contains all principled issues regarding eventual solutions of the issues on the Korean Peninsula, he said. "Once the DPRK-US Joint Statement is implemented, the current trend toward detente will turn into durable peace, and the complete denuclearization of the Korean Peninsula will also be achieved."

At this critical juncture, the US should make a judgment that faithful fulfillment of its commitment will, in the end, be in the best national interests of the United Sates and should maintain new methods for solving the DPRK-US relations, he said.

It's reported that US Secretary of State Mike Pompeo is planning to visit Pyongyang next month to prepare for a second Kim-Trump summit.