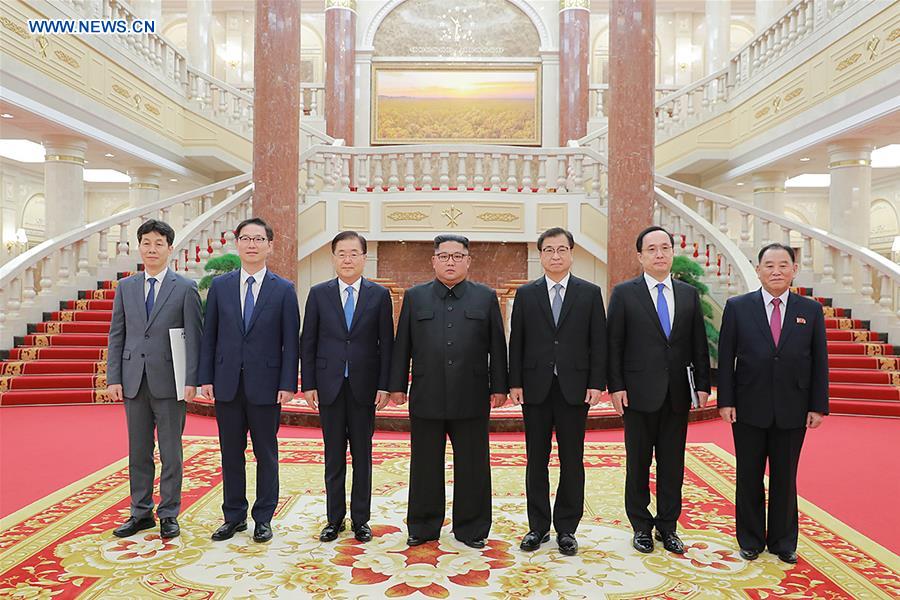 PYONGYANG/SEOUL, Sept. 6 (Xinhua) -- Kim Jong-un, top leader of the Democratic People's Republic of Korea (DPRK), has called on the two sides to further their efforts towards the denuclearization of the Korean Peninsula.

Kim made the call when he met with the members of a special delegation of South Korean President Moon Jae-in in Pyongyang on Wednesday, which was led by Chung Eui-yong, Moon's top national security adviser, the official Korean Central News Agency (KCNA) reported Thursday.

Kim firmly supports and will be devoted to completely removing the danger of armed conflicts and the horror of war from the Korean Peninsula and turning it into a cradle of peace without nuclear weapons and free from nuclear threats, according to the KCNA.

Kim discussed the schedule with the special delegation for the Pyongyang summit between him and Moon due in September, and "came to a satisfactory agreement with it," the KCNA said.

After reading a personal letter from Moon, which was delivered by the special delegation, Kim thanked the South Korean president for sending the letter, which expressed a firm will to wisely overcome many challenges in the future, "and open a bright future of our nation while appreciating the fresh advance in the relations between the north and the south," the KCNA said.

Kim fully supports Moon and "remains unchanged in his determination to strive hard to bring the fellow countrymen better results at an early date, bearing in mind the mission before the nation and its expectation," the KCNA added.

What's more, Chung said in Seoul on Thursday that Kim again expressed his firm commitment to the complete denuclearization of the Korean Peninsula.

The DPRK leader said he was willing to ly cooperate with the United States as well as South Korea for the complete denuclearization, Chung told a press briefing in Seoul after the delegation's one-day visit to Pyongyang.

During the meeting with the South Korean delegation, Kim expressed his "stuffy" feeling over a part of the international community's raising doubts about his resolve to denuclearize, the chief special envoy said.

Kim said the DPRK had taken advance measures for the denuclearization, which he hoped would be accepted as a gesture of goodwill, citing the dismantlement of its main Punggye-ri nuclear test site and its key Tongchang-ri missile engine test site.

Kim said no more nuclear tests would be conducted as the nuclear test site had been completely destroyed, while dismantling the missile engine test site, the DPRK's sole test site, meant the complete suspension of long-range ballistic missile test-firings in the future.

Kim asked the South Korean delegation to convey his message to the US side, saying he would continue to trust US President Donald Trump.

To discuss specific measures to be taken for the denuclearization, Moon and Kim will hold a summit for three days starting from Sept. 18 in Pyongyang, Chung said. However, the KCNA did not mention any specific date for the summit.

The two Koreas will hold a high-ranking working-level meeting early next week at the border village of Panmunjom to discuss protocol, security, communications and media coverage for the upcoming summit, Chung said.

During the upcoming summit, Moon and Kim are expected to discuss specific measures to denuclearize the Korean Peninsula, as well as issues surrounding the permanent settlement of peace and prosperous coexistence on the peninsula and the implementation of the Panmunjom Declaration, which the two leaders signed after their April summit.

The two Koreas, the special envoy said, agreed to keep advancing the ongoing dialogue to defuse military tensions along the inter-Korean border, and to reach an agreement at the upcoming summit on concrete measures to build mutual trust and prevent military clashes.

Seoul and Pyongyang also agreed to open a joint inter-Korean liaison office before the Moon-Kim summit is held. The two sides have already completed the necessary preparations to open the joint liaison office at the DPRK's border town of Kaesong.

Chung said South Korea will brief the countries concerned, including the United States, in detail on the outcome of the special delegation's visit to Pyongyang, and ly cooperate with them.