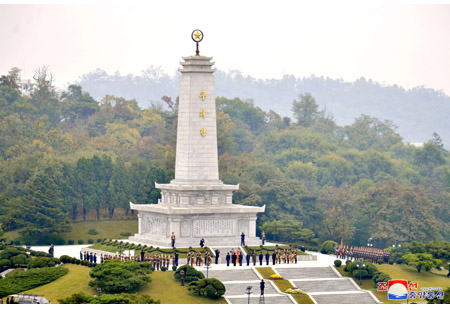 The Korean Central News Agency(KCNA) reported on Thursday that Kim, together with DPRK officials, visited CPV's martyrs tower at the cemetery for martyrs of the CPV in South Pyongan Province. A flower basket was presented in Kim's name.

Kim Jong Un said that although it has been 70 years since the war, the people of DPRK still remember the heroic achievements of the CPV in resisting U.S. aggression and selflessly supporting the DPRK under extremely difficult circumstances.

He said that the country will never forget the CPV soldiers' noble spirit of selflessness as they risked their lives and made sacrifices to conquer invasion of the forces of imperialism.

No matter how much time passes and generations change, the significance of the great victory achieved by the two countries in the war created a link between the military and the people that remains unchanged, the DPRK leader said.

According to the KCNA, Kim also visited the Friendship Tower in Pyongyang on Wednesday, presenting a flower basket at the tower.

The Friendship Tower was built on October 25, 1959 to commemorate the CPV sacrifice in the war.