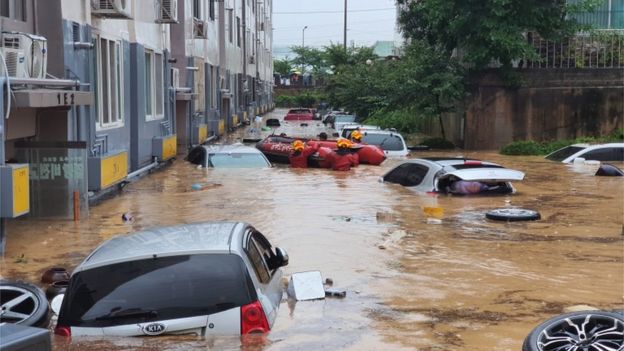 PYONGYANG, Sept. 3 (Xinhua) -- Kim Tok Hun, premier of the Democratic People's Republic of Korean (DPRK), made a field survey on the recovery from flood damage in Kimhwa and Phyonggang counties of Kangwon Province, the official Korean Central News Agency (KCNA) reported on Thursday.

Kim, also a member of the Presidium of the Political Bureau of the Central Committee of the Workers' Party, made rounds of houses under construction in the township and the site in Choso Co-op Farm of Kimhwa County where a recovery campaign is underway, the report said.

He stressed the need for local officials to provide people with stable living conditions, solve difficulties of the inhabitants in the flood-affected areas, as well as work hard and carefully to eradicate the flood damage as early as possible.

The premier also urged the officials to accelerate the rehabilitation projects, including the army-civilian joint operation to build houses and repair roads.

Over the past two month, the DPRK has suffered from heavy rains, powerful typhoons and severe floods in some parts of the country, which has caused damage to houses and farmland. Typhoon Bavi landed at the country last week, causing flooding and destruction in many areas.

With Typhoon Maysak heading toward the Korean Peninsula, the government has taken urgent measures to prevent the possible damage. The typhoon is expected to hit the country later on Thursday, the KCNA said in an earlier report.

"A warning has been issued in the country that Typhoon No. 9 (Maysak), coming from the Philippines, is likely to affect the country. As such, we are taking active measures to prevent damage in the country's eastern regions," the Rodong Sinmun, the official newspaper of the ruling party, said in a report on Wednesday.