Kim Jong-un, top leader of the Democratic People's Republic of Korea (DPRK), began talks with visiting South Korean President Moon Jae-in on Tuesday afternoon at the Workers' Party of Korea's headquarters in Pyongyang, in the third summit for the pair this year. 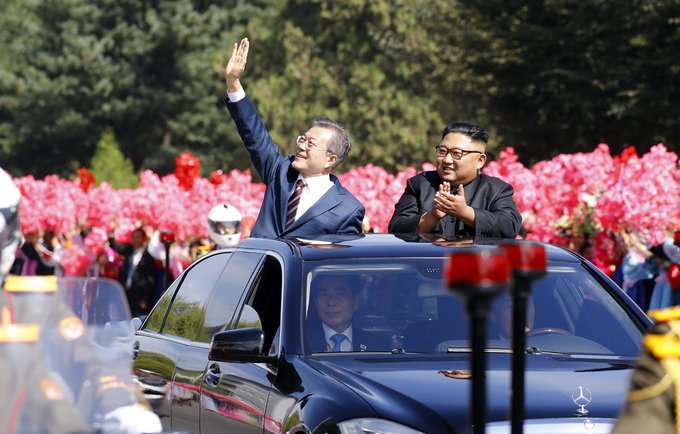 There is yet no report on the results of the talks, which started around 3:30 p.m. local time (0630 GMT). The two leaders are expected to discuss three major topics: the improvement of inter-Korean relations, the possible ways to revive the stalled DPRK-US denuclearization talks, and the elimination of military tensions and risks of war on the peninsula.

Moon arrived in Pyongyang for his third summit with Kim this year. The previous two inter-Korean summits took place in the truce village of Panmunjom in April and May.

Moon's visit is also the first by a South Korean head of state to Pyongyang in 11 years.

Kim greeted Moon at the airport in person and they left in one black sedan after a grand welcoming ceremony involving ceremonial guards and hundreds of cheering civilians.

The pair, escorted by a motorcade, smiled and waved to local residents while their car traveled past the Ryomyong Street in downtown Pyongyang.

After the talks, the two leaders will watch a mass gymnastics and artistic performance "The Glorious Country" in the evening.

They will resume talks on Wednesday morning and hopefully sign a peace treaty to end the military tensions on the peninsula.

The Pyongyang summit "will offer an important opportunity in further accelerating the development of inter-Korean relations that is making new history," the KCNA said.

The official newspaper Rodong Sinmun ran an editorial on Monday, highlighting the historic significance of the Panmunjom Declaration and calling for concerted efforts by the DPRK and South Korea to further improve their relations and jointly overcome the difficulties on the path toward reunification.

On the South Korean side, Moon said before his departure for Pyongyang that he planned to have a lot of frank talks with Kim during his visit to the DPRK in order to bring "irreversible, permanent peace to the Korean Peninsula" and help restart the DPRK-US dialogue on the denuclearization of the peninsula.

The two leaders will also discuss economic cooperation. There are many business leaders in Moon's delegation of over 150 members, including executives from some of South Korea's largest conglomerates such as Samsung, LG and Hyundai.