Pyongyang (People's Daily) - Kim Jong-un, chairman of the Workers' Party of Korea, chairman of the State Affairs Commission of the Democratic People's Republic of Korea and supreme commander of the Korean People's Army, visited the test ground of the Academy of Defence Science and supervised a newly developed ultramodern tactical weapon test. 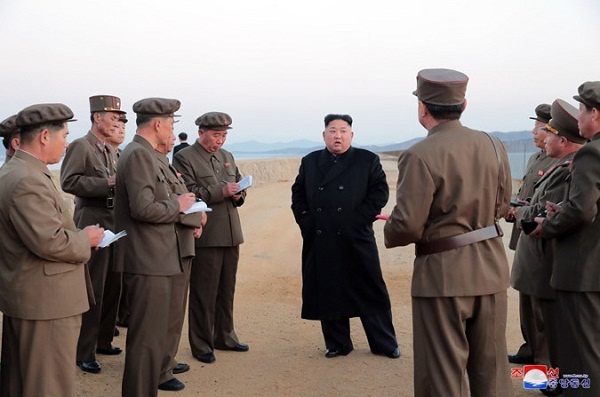 After seeing the power of the tactical weapon, Supreme Leader Kim Jong-un was so excited to say that another great work was done by the defence scientists and munitions industrial workers to increase the defence capability of the country and the weapon system whose development Chairman Kim Jong Il had chosen personally and directed step by step with his special attention paid to it was born at last. He added that the weapon is just like a posthumous weapon and he missed Kim Jong Il very much while seeing the great success of its test.

Kim Jong-un highly praised the officials, scientists, technicians and munitions industrial workers for successfully conducting the test of an ultramodern tactical weapon, to which the Party has attached importance in ardent expectation.

He expressed great satisfaction, saying the great success serves as another striking demonstration of the validity of the Party policy of prioritizing defence science and technology and the rapidly developing defence capability of the country and as a decisive turn in bolstering the fighting capacity of the Korean People's Army.