WORLD DPRK says US extension of sanctions 'a hostile act,' urges use of domestic goods

DPRK says US extension of sanctions 'a hostile act,' urges use of domestic goods

The recent U.S. extension of sanctions against the Democratic People's Republic of Korea (DPRK) was an act of hostility and an outright challenge to an historic summit between the two countries in Singapore last year, Pyongyang's media said on Wednesday. 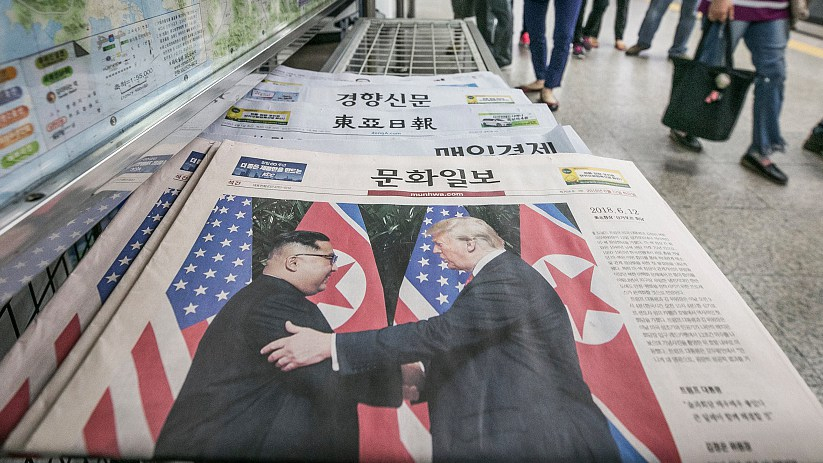 The White House extended last week six executive orders containing sanctions imposed over DPRK's nuclear and missile programs by one year. A foreign ministry spokesman called the move a "manifestation of the most extreme hostile acts" in a statement carried by the DPRK's KCNA news agency.

The spokesperson also denounced U.S. Secretary of State Mike Pompeo's remarks on Sunday that more than 80 percent of the DPRK economy has been affected by sanctions. "All these speak clearly to the fact that the wild dream of the United States to bring us to our knees by means of sanctions and pressure has not changed at all but grows even more undisguised," he added.

In the face of the sanctions, local media urged its citizens to use domestically produced goods, rather than imports.

"To sort out problems arising in the process of economic development and make the sanction scheme of our enemies bear no fruit, it would be critical to boost a self-reliant economy," Yonhap reported, citing an article published by the Rodong Sinmun, the organ of the DPRK's ruling party, on Wednesday. "One of the important methods to strengthen a self-reliant economy involves people actively using their own products," the paper said. "When all people prefer and use domestic goods, it would lead to a process of expansive reproduction and help the national economy advance."  The paper noted that depending on imports would make the country subservient to foreign countries, saying that real patriotism lies in ceaseless efforts to overcome any challenges and produce world-class goods through research and development, said Yonhap.

But a second summit in Vietnam in February collapsed as both sides failed to bridge differences between U.S.'s calls for denuclearization and DPRK's demands for sanctions relief. Since then, the DPRK has complained of U.S. sanctions and demanded Pompeo be replaced by someone "more mature," while lauding the rapport Kim built with Trump. Pompeo, speaking to reporters on Sunday, raised hopes for a revival of nuclear talks after a recent exchange of letters between the two leaders. The DPRK spokesman warned it would be difficult to achieve denuclearization as long as U.S. politics are dominated by policymakers who have an "inveterate antagonism" towards the DPRK. "We would not thirst for a lifting of sanctions," the spokesman said. "Our state is not a country that will surrender to the U.S. sanctions, nor are we a country which the U.S. could attack whenever it desires to do so."