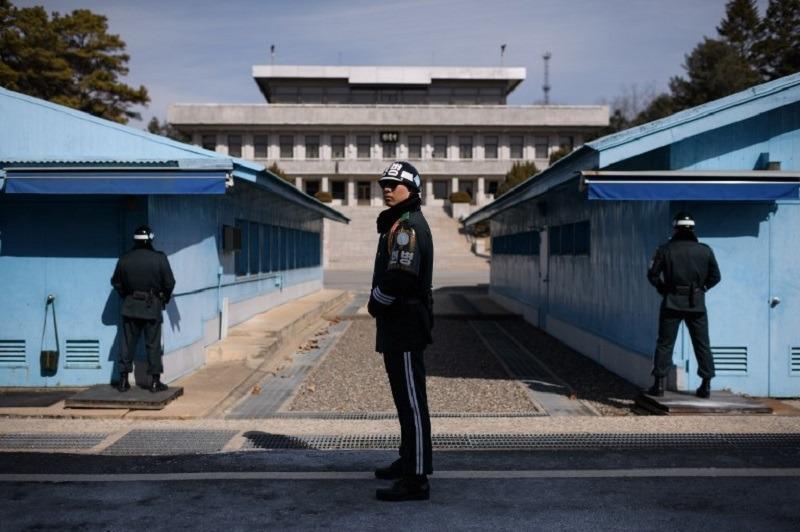 An ROK soldier (center) stands guard before the military demarcation line and DPRK's Panmun Hall, in the truce village of Panmunjom, within the Demilitarized Zone (DMZ) on Feb 21, 2018. (File photo: AFP)

PYONGYANG, June 6 (Xinhua) -- The Democratic People's Republic of Korea (DPRK) will withdraw from the inter-Korean liaison office because South Korea has not acted enough to stop groups from sending anti-Pyongyang leaflets into the DPRK's territory, a DPRK official said late Friday night.

The decision was announced by a spokesperson of the United Front Department of the Central Committee of the Workers' Party (CCWP) which oversees relations with South Korea, the Korean Central News Agency reported.

"First Vice Department Director (of CCWP) Kim Yo Jong Friday gave instructions to the field in charge of the affairs with South Korea to start examination for the technical implementation of the content mentioned in the statement," the spokesperson said.

On Thursday, Kim Yo Jong, who is the younger sister of DPRK's top leader Kim Jong Un, warned Seoul that the North would close the liaison office or even withdraw from the inter-Korean military agreement signed in 2018 if the South didn't take swift measures against the hostile action of sending the anti-Pyongyang leaflets into the DPRK.

"It was May 31 when the anti-DPRK leaflets were openly flown but the nonstop disposal of dirty rubbish from the South side has exhausted us so much as to come to a clearer conclusion that enemies are enemies after all," the spokesperson said.

Therefore, "as the first thing, we will definitely withdraw the idling north-south joint liaison office housed in the Kaesong Industrial Zone," the spokesperson said, adding more punitive measures will be followed.

"Our people are feeling towering rage and disgust towards the act of scattering anti-DPRK leaflets by the 'defectors from the north' and the South Korean authorities' connivance at it," the statement said.

"We do not hide that we have had long in mind decisive measures to fundamentally remove all provocations from the south and to completely shut down and remove all the contact leverage with the south side," the spokesperson stressed.

After Kim Yo Jong made the hardline statement, South Korea promised on Thursday to take legislative measures to ban flying-in of propaganda leaflets into the North.