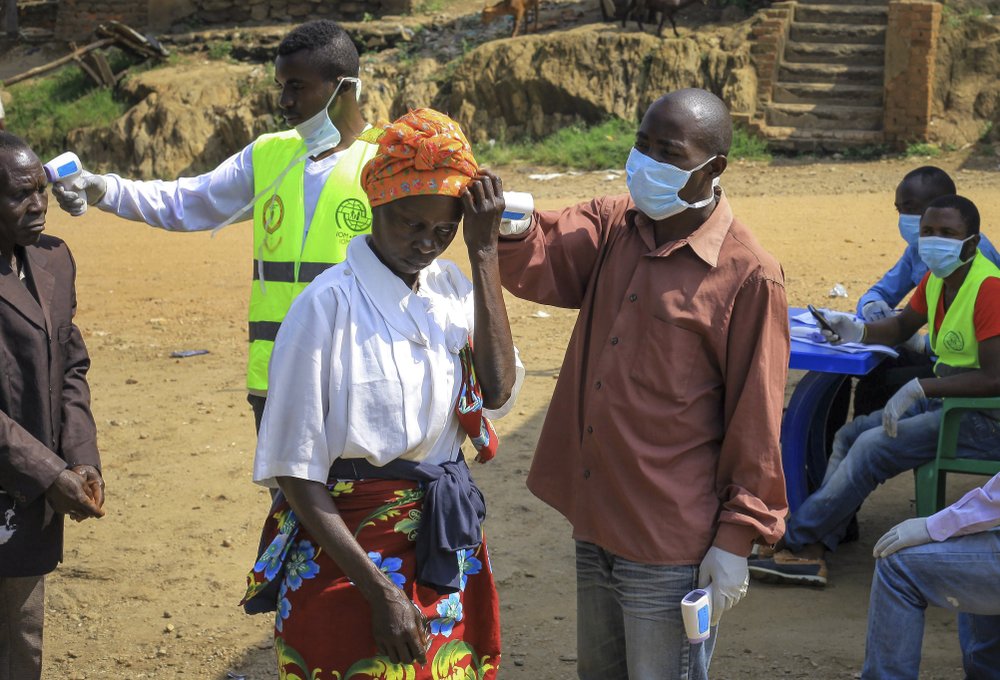 People crossing the border have their temperature taken to check for symptoms of Ebola, at the border crossing near Kasindi, eastern Congo, June 12, 2019. (File photo: AP)

DR Congo on Thursday officially declared an end to an Ebola epidemic that broke out in the east of the troubled country two years ago and went on to claim over 2,000 lives.

The outbreak was "the longest, most complex and deadliest" in the 60-year history of the Democratic Republic of Congo, Health Minister Eteni Longondo said.

On June 1, as the epidemic in the east waned, a new outbreak -- the DRC's 11th since Ebola was identified in 1976 -- was announced in the country's northwest.

For an outbreak to be officially over, there have to be no new cases reported for 42 days, which is double the incubation period of the deadly haemorrhagic microbe.

The eastern outbreak was just three days from reaching the finishing line in April when a new case was reported. Further cases meant that the clock was restarted on May 14.

The World Health Organization (WHO) reacted with joy to Thursday's announcement from the biggest country in sub-Saharan Africa.

"#Ebola outbreak in #DRC is OVER! WHO congratulates all those involved in this tough and often dangerous work to end the almost 2-year long outbreak," it said on Twitter.

The DRC is also struggling with the new coronavirus, with 6,411 cases including 142 fatalities, and measles, which has killed more than 6,000 people since early 2019 .

It was declared by the WHO in July 2019 to be a Public Health Emergency of International Concern -- a move that steps up international support -- given the epicentre's close proximity to neighbouring Rwanda and Uganda.

The worst-hit area was North Kivu, a province battered by militia killings and ethnic violence.

Eleven workers and patients were killed, including a Cameroonian doctor, the UN said.

Two experimental vaccines were brought in to help roll back the disease.

More than 320,000 people received the jab, and the success means that "people are demanding to have the vaccine. It makes the campaign easier," said Professor Jean-Jacques Muyembe, in charge of the anti-Ebola fight.

The Ebola virus is passed on by contact with the blood, body fluids, secretions or organs of an infected or recently deceased person.

It has a natural reservoir in nature, which is believed to be a species of bat.

The northwest's outbreak, about 1,000 kilometres (600 miles) away from the one in the east, is focused on Mbandaka, a transport hub on the Congo River in the province of Equateur.

It has claimed 13 lives out of 24 cases, according to the WHO.

Equateur was previously hit by Ebola between May and July 2018. Thirty-three people died.

Ebola experts said the experience of the eastern outbreak would be vital for informing further action against Ebola.

One problem was an influx of wealth among health workers and their escorts in the armed forces -- guards were given per-diem expenses of $300-400 per month in a country where per-income capita is around $500 a year.

The river of money created envy that militia groups readily exploited, they said.

"Questionable practices in the Ebola response in the Democratic Republic of Congo, including payments to security forces, renting vehicles at inflated prices, and job kickback schemes, may have jeopardised humanitarian operations and put lives at risk," a specialised news site, The New Humanitarian, said in an investigation published on June 18.

An AFP reporter found that a lucrative business had developed in job appointments, with middle men creaming off commission, and some women said they had been pressed to provide sexual services in exchange for work.