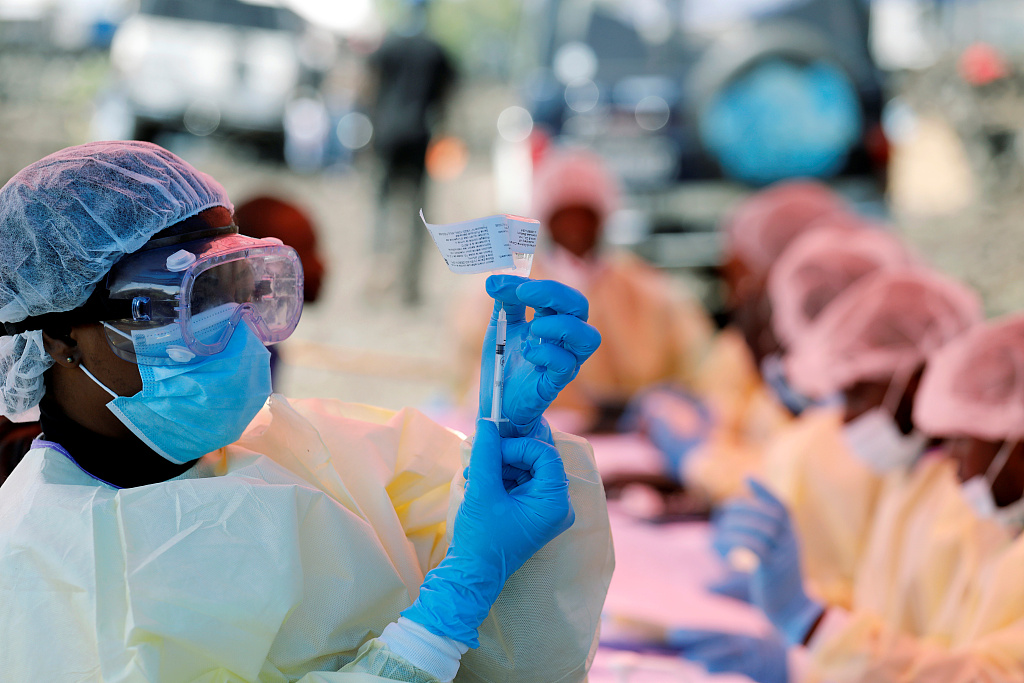 A health worker fills a syringe with Ebola vaccine before injecting it to a patient, in Goma, Democratic Republic of Congo, August 5, 2019. (File photo: VCG)

GENEVA, Oct. 18 (Xinhua) -- The ongoing Ebola outbreak in Democratic Republic of Congo (DR Congo), despite the consistently declining numbers of affected cases during the past weeks, still stands as a public health emergency of international concern (PHEIC), the World Health Organization (WHO) said on Friday.

The WHO decision was made after the fifth meeting of the International Health Regulations (2005) Emergency Committee, convened by the WHO Director-General Tedros Adhanom Ghebreyesus on Friday.

Latest numbers from the WHO show that a total of 3,228 Ebola cases have been reported in the DR Congo, including 3,114 confirmed and 114 probable.

In recent weeks, the incidence of cases has consistently declined. However, the hot spots of outbreak have shifted from urban settings to more rural, hard-to-reach communities across a more concentrated geographical area, where the potential for the disease to spread to new areas increases if response activities are suspended.

Insecurity, meanwhile, remains the greatest concern, even as efforts to increase security are underway, the WHO said, underlining that a major priority for now is to identify areas where the virus might migrate and securing these areas.

While maintaining that the DR Congo Ebola risk remains very high at national and regional levels but still low at global level, the WHO recommends that all at-risk countries work urgently with partners to improve their preparedness for detecting and managing imported or locally-acquired cases.

According to the WHO emergency committee, a major challenge currently is the lack of funding for preparedness. Of the 66.6 million U.S. dollars required for the DR Congo's nine neighboring countries, only 4.5 million dollars has been pledged.