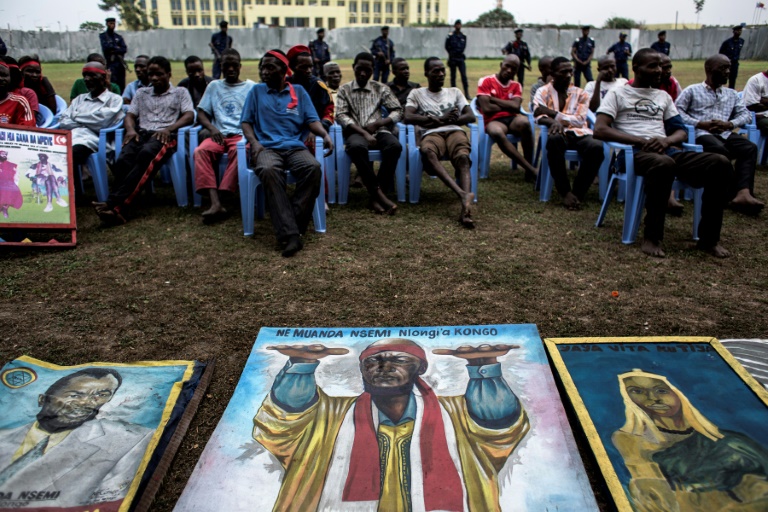 Paintings of Ne Muanda Nsemi put on display at police headquarters in Kinshasa in 2017. (Photo: AFP)

The self-styled prophet of a separatist sect blamed for deadly attacks in the Democratic Republic of Congo has been arrested in a raid on his home in Kinshasa involving hundreds of security forces.

A police source, speaking on condition of anonymity, said several BDK members were found in the house and added that an undisclosed number of people had died in the raid.

An interior ministry statement said at least eight people were killed and another 35 injured, without giving details. A total of 168 were arrested, according to the statement.

Police said that eight officers were seriously injured in the raid, suggesting that the fatalities were all sect members.

An eyewitness told AFP he had seen 15 bodies after the police action, and many more injured.

Nsemi, who is aged around 70, was taken to hospital with a head injury before being handed over to prosecutors.

Police condemned some members of the security forces for looting belongings from the property after the raid, saying in a statement that the perpetrators would be punished.

The BDK aims to revive the pre-colonial Kongo kingdom that included what are today parts of neighbouring Angola, the Republic of Congo and Gabon, and has repeatedly fought with security forces.

Since April 13, about 20 sect members and police have been killed in three separate clashes on a key highway in the Kongo Central province that neighbours Kinshasa.

The route is vital as it links Kinshasa, home to some 10 million people, to the ports of Matadi and Moanda.

At the end of March, police dispersed several BDK members in Kinshasa for defying a ban on gatherings of more than 20 people imposed to halt the spread of the novel coronavirus.

Nsemi, a former chemistry teacher, was detained in 2017 for inciting tribal hatred but later escaped from prison during a brazen pre-dawn raid.

He spent two years on the run before being re-arrested days after making a public appearance this week on television.

He re-entered political life in 2019 following the election of president Felix Tshisekedi, and in January proclaimed himself president of the DR Congo in a "divine coup".

Dozens of armed groups and militias operate in DR Congo, many in the east of the country, a legacy of the two Congo wars in the 1990s that dragged in the country's neighbours Uganda and Rwanda.