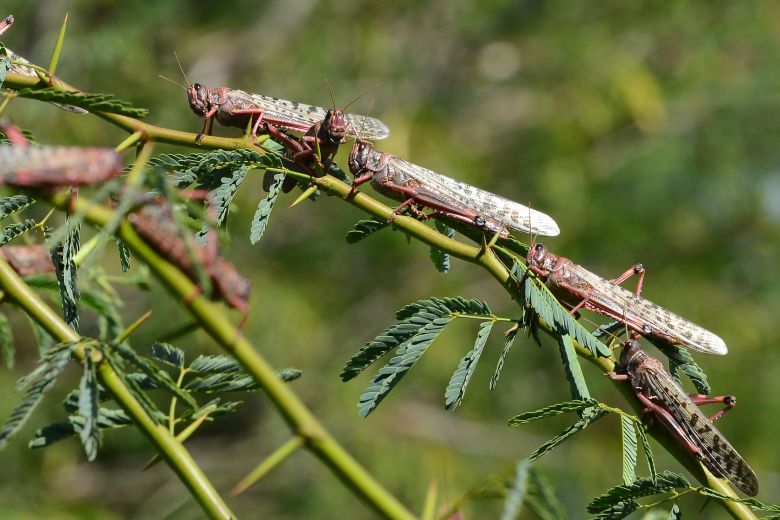 Locust swarms can fly up to 150km a day with the wind, and adult insects can consume roughly their own weight in fresh food per day. (Photo: AFP)

NEW DELHI, Feb. 23 (Xinhua) -- Farmer in India have suffered a lot after a huge swarm of "Desert Locusts" hit standing crops in hundreds and thousands of hectares of agriculture fields in western states of Gujarat and Rajasthan, and also parts of adjoining state (towards the north) Punjab earlier this month.

Crops of mustard, castor, cumin and wheat suffered the worst damage in these states. In Rajasthan, oilseed and cumin crops too were heavily damaged in the Jalore and Jaisalmer districts, while in Gujarat wheat crops in Banaskantha, Patan, Mehsana and Sabarkantha districts were the worst affected, say the official data released by the respective state governments.

This was nearly after 26 years when the swarm of "Desert Locusts" had hit the agricultural crops in India in such large numbers.

Considering the quantum of damage left behind the swarm attack, the state governments of Gujarat and Rajasthan have identified about 65,000 farmers (11,230 from Gujarat and 54,150 from Rajasthan) who will receive compensation, said the country's Agriculture Minister Narendra Singh Tomar.

According to him, more than 168,000 hectares of land in the country had been affected by Locust attacks, with Rajasthan and Gujarat taking the worst hit.

Anil Sharma, who recently retired as "Plant Protection Officer (PPO)" from Rajasthan government said that this was nearly after 26 years when the swarm of "Desert Locusts" had hit the agricultural crops in India in such large numbers.

According to him, "Desert Locusts" is a global problem, as these insects affect as many as  more than 60 countries and regions at different points of time in a year depending on the climate and wind direction.

Rainwater had gathered in different parts of the arid desert that sprawls over Saudi Arabia, Oman, the United Arab Emirates (UAE) and Yemen after it was hit by Cyclone Mekunu in May 2018. This created favourable breeding conditions for desert locusts, said Sharma.

"In October that year, the Arabian Peninsula was hit by Cyclone Luban, which created more favourable conditions for locusts to breed. In search of food, these Locusts then flew eastwards towards Pakistan and India. They come very suddenly. This insect is dreaded most by farmers across the world. The swarms are so thick that they even block sunlight," added the veteran expert on plant protection.

He stated that while Locusts invasions on standing crops were normal, the current attack in India had been a "plague-like situation" not seen in recent times.

According to Rajesh Kumar, the Plant Protection Officer at the "Locust Warning Organisation" in Jaisalmer district of Rajasthan was quoted as saying "As the swarm moves with the direction of the wind, it's very difficult to chalk out a plan to completely eliminate (them), which as a result leaves some farmers vulnerable to fend for themselves."