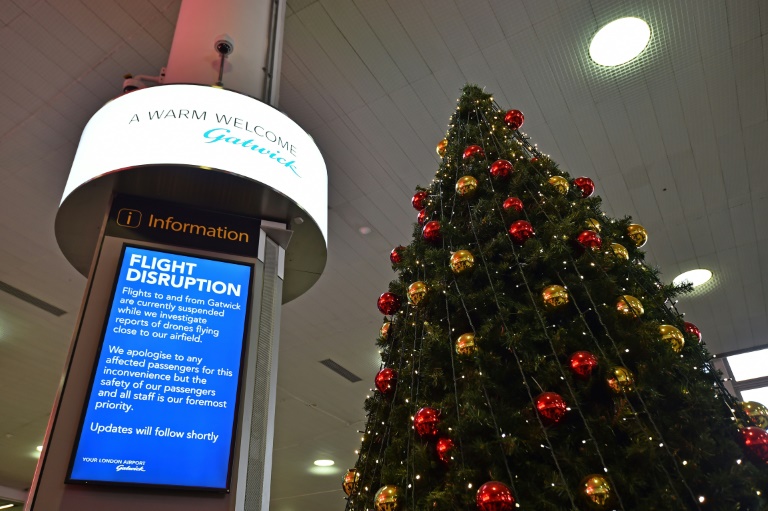 An information board announces flight disruption at London Gatwick Airport, south of London, caused by an intrusions of drones as tens of thousands of passengers were trying to get home for the holidays (Photo: AFP)

British police were on Thursday frantically hunting for the operators of drones flown over London's Gatwick airport, which forced the suspension of all flights, causing misery for tens of thousands of passengers just days before Christmas.

The airport's authorities said its sole runway would stay shut until at least 4:00 pm (1600 GMT) due to "drone sightings" that began on Wednesday evening.

"We have had within the last hour another drone sighting," Gatwick's chief operating officer Chris Woodroofe said mid-day Thursday.

"It was on the airport, seen by the police, corroborated, and so having seen that drone that close to the runway it was unsafe to reopen," he told BBC News.

Woodroofe earlier it would be dangerous to shoot at the drone due to the danger of stray bullets.

Flights into Gatwick, around 30 miles (50 kilometres) south of the British capital, were diverted to other airports while passengers waiting to take off faced gruelling delays as airlines cancelled flights.

Some 10,000 passengers were affected on Wednesday night, and a further 110,000 were due to either take off or land at the airport on 760 flights on Thursday.

Gatwick is the eighth-busiest airport in Europe and sits behind Mumbai as the world's busiest single runway air hub.

A cat-and-mouse manhunt is under way to catch those operating the drones, with more than 20 police units and dozens of officers from two local forces deployed.

Sussex Police said they believed that the devices "are of an industrial specification".

Police superintendent Justin Burtenshaw said: "We believe this to be a deliberate act to disrupt the airport. However, there are absolutely no indications to suggest this is terror-related."

He added: "Each time we believe we get close to the operator, the drone disappears; when we look to reopen the airfield, the drone reappears."

Gisele Fenech, 43, who was travelling to Malta, was among those stranded at the airport.

"We're meeting family and it's my daughter's birthday today so it's gone all wrong. We've been looking forward to this for so long," she told AFP.

"Everyone's trying to get home for Christmas."

Two drones were first spotted flying over Gatwick at around 9:00 pm (2100 GMT) on Wednesday. The airfield briefly reopened at 3:00 am on Thursday, but had to be closed again following further sightings.

"Please do not set out for the airport for your flight without checking with your airline first," the airport said on Twitter. "We're sorry for the disruption."

"We will continue to work with the Gatwick authorities and police will be working... in order to bring this to a close," she said at a press conference with her Polish counterpart who is visiting London.

Inside the airport, weary passengers faced a grim wait to reach their destinations, with many returning home for the holidays.

Karin Sjostrom-Nandris, 49, who was heading to Stockholm, said: "We can't really leave this queue because this seems to be the only place we could possibly find out any information.

"The queue looks like it's several hours long, so we could be here for some time."

Under a new British law, drones cannot be flown near aircraft or within a kilometre of an airport, or at an altitude of over 400 feet (122 metres).

May warned the perpetrators they could face up to five years in prison for endangering an aircraft under recently passed legislation.

"We're consulting on further aspects of this including further police powers," she added.

In parliament, members of the upper House of Lords raised the likelihood of a new wave of people getting hold of drones as presents this Christmas.

Gatwick serves more than 228 destinations in 74 countries for 45 million passengers a year.