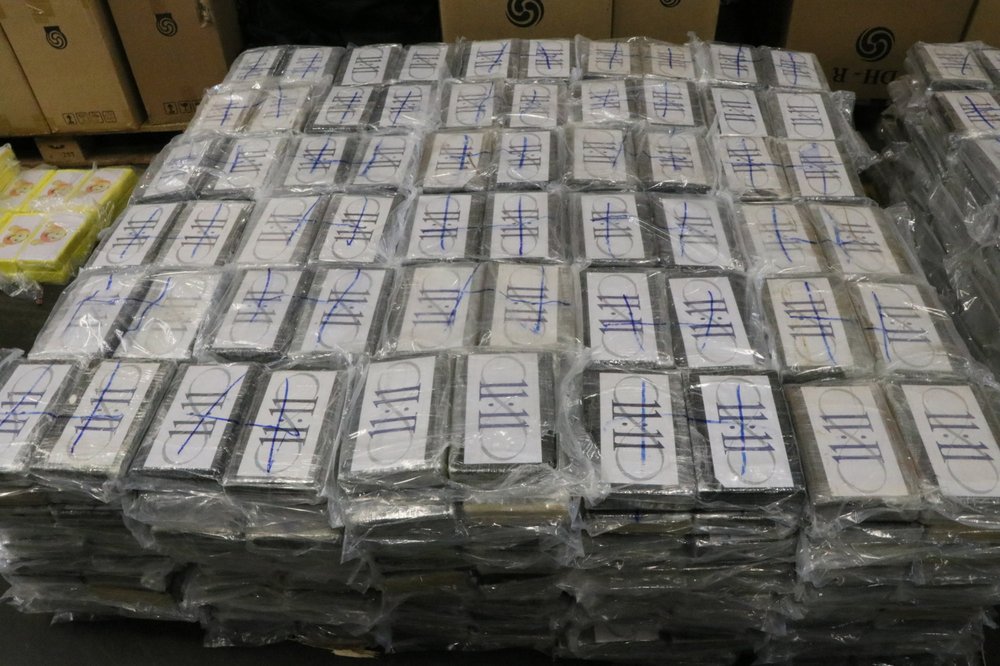 In this file handout photo from July, 2019, German customs authorities display 4.5 tons (nearly 5 US tons) of cocaine seized from containers shipped to Hamburg, Germany, from Uruguay, a haul with an estimated street value of nearly 1 billion euros ($1.1 billion). (Photo: AP)

First more than a half ton of cocaine was seized from a plane at a French airport. Then a shipping container with 4.6 tons of the drug was found in Hamburg, Germany, where authorities estimated its street value at a staggering $1.1 billion.

The departure point of both shipments: Uruguay, South America’s smallest Spanish-speaking country, one that seldom makes the headlines for international drug trafficking.

The shipments in May and July set off alarms in the country and led its customs director to resign. Then German broadcaster Deutsche Welle reported that Uruguay had become a world drug trafficking hub in recent years. Authorities on both sides of the Atlantic said they had noticed a change in cocaine trafficking patterns from Uruguay.

Amid secrecy, senior government officials met with customs agents and exporters to find out what was happening. One participant said it appears that in Uruguay’s bid to speed up trade and lower export costs, customs controls have been neglected and the roving eye of the global drug trade — always searching for weak points — found an easy shipment point in this country of just 3.4 million inhabitants, where exports represented 12.6% of its gross domestic product.

“We are a route, as are many other” countries, said Attorney General Jorge Díaz. “But it is true that certain controls have been weakened or are not at the level they should be.”

Deputy Economy Minister Pablo Ferreri told The Associated Press that the drug seizures in Europe came as a shock, but said that “we are working very hard to quickly improve what must be improved.”

Customs officials say Uruguay’s controls focus on imports, not exports, which are important to the economy and which no one wants to threaten, said Leonardo Couto, a customs broker who participated in meetings seeking to improve the export control system.

In the port of Montevideo, Uruguay’s capital, the customs terminal has a single scanner that is operated by officials who work only during office hours, never at night. Additionally, the machine is used solely to check imports. Inspecting all the containers leaving the country is impossible because of the costs and delays that would entail. A computer program analyzes what the merchandise is, its destination and who is moving it to determine which containers are inspected. Less than 3% of containers are examined.

“Everyone in the chain has failed to pay attention to this phenomenon. In the desire to lower and lower costs, we began to relegate controls. Not only the state, everyone,” said Couto, who as a dispatcher sends between 300 and 400 containers from Uruguay to other parts of the world every month.

The shipment with cocaine seized in Hamburg was greenlighted in Uruguay without inspection despite its unusual nature: It had four containers of soybeans, a much smaller quantity than a normal shipment would contain.

“Soybeans are usually exported in full boats, without containers. That should have attracted attention,” Couto said. “Risk assessment failed. It was not handled well.”

Díaz, the attorney general, says he has seen everything: drugs hidden in shipments of meat and wool, a half ton of cocaine concealed in fishing nets and 2 tons in a yacht that was preparing to travel to Serbia. Those seizures happened in 2003-2010. That era was followed by years of calm and Uruguayan authorities thought the drug route through their country had been closed.

But the latest events suggest the route has reopened, maybe because Uruguay let its guard down, Díaz said

“Since 2009 there has been no plan to combat drug trafficking,” he said in an interview on the FM Ocean station.

Laurent Laniel, principal scientific analyst at the European Monitoring Center for Drugs and Drug Addiction, said the center began noticing drug shipments from Uruguay this year, though still in smaller quantities than from other South American nations.

The center’s most recent report is from 2017, when 140 tons of cocaine were seized, with Colombia, Brazil and Ecuador the main countries from which the drugs departed, Laniel said.

But the growing role Uruguay could be playing in the trade, he said, can be seen at Antwerp, Belgium, which is Europe’s main port for seizures of drugs from Latin America.

Between January and July this year, authorities made two seizures of cocaine from Uruguay destined for Antwerp, including the mega-seizure in Hamburg, which was headed to the Belgian city, and 1.2 more tons on July 23 in a container that was already in the port. In comparison, only 120 kilograms (265 pounds) of cocaine from Uruguay en route to Antwerp were seized in 2018.

No authority has pointed to a specific cartel or group as being behind the Uruguay shipments.

For Laniel, drug trafficking cannot be understood without corruption.

“The bribes detected are just the tip of the iceberg,” said Díaz, the Uruguayan prosecutor. “To reach that level of shamelessness there have to be many others.”

Defense Minister José Bayardi, told AP the presence of narco-mafias worries him because when they prosper, they “end up disarticulating the country’s institutions.”

While high levels of corruption have not been detected in the port of Montevideo, a Uruguayan air force corporal was jailed for allegedly taking $30,000 to look the other way while bags passed through a scanner in the case of the flight that landed in France with 600 kilograms of drugs.

Claire Georges, a spokesperson for the European police agency Europol, said the agency is seeing more reports in open sources about the increasing use of Uruguay by organized crime groups for cocaine shipments headings to Europe, though she said it has received little reporting directly from European Union member states about it.

Laniel said Uruguay is still far from being the epicenter of drug trafficking from Latin America to Europe.

Its presence in the world drug trade is “a little thing that has just emerged,” he said. “Let’s see if it gains more breadth.”