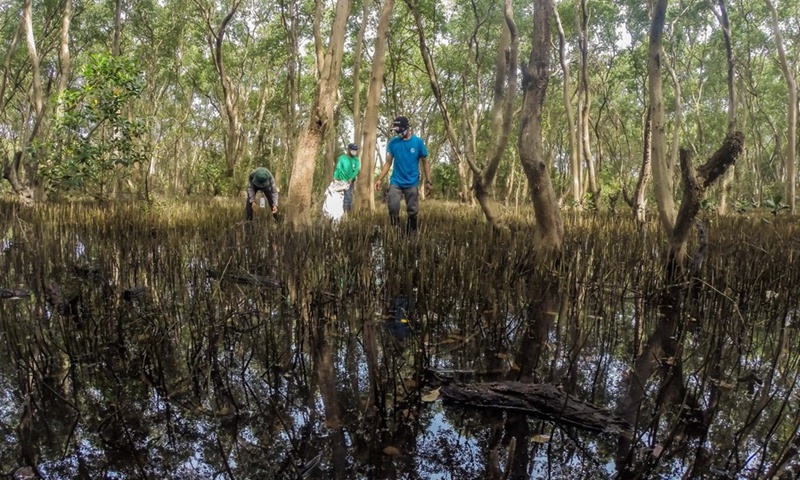 Workers from the Department of Environment and Natural Resources (DENR) clear the fallen branches and pick up the garbage washed from the Manila Bay at the Mangrove Forest of the Las Pinas-Paranaque Wetland Park in Las Pinas City, the Philippines, April 20, 2021.(Photo: Xinhua)

Rodzon Enriquez's skeletal remains are pulled out of a coffin-sized tomb in Manila and placed in a body bag. Five years after the 21-year-old was killed in the Philippines' drug war, the lease on his grave is expiring.

Activists estimate tens of thousands of people have died since President Rodrigo Duterte ordered police to go after drug addicts and dealers in a widely condemned campaign that has largely targeted poor men.

Many of the dead were put in "apartment" tombs stacked in jam-packed cemeteries across the sprawling capital, where a five-year lease on a rectangular concrete box costs about 5,000 pesos ($100).

As leases run out, a Catholic charity is helping families unable to afford the renewal fee to retrieve the bones of their loved ones with the aim of having them cremated and put in a permanent burial site.

"I don't want his remains thrown away," Corazon Enriquez, 63, told AFP, after her son's bones were carried away on a stretcher by two men wearing masks, gloves and protective coats.

"If you know of any addicts, go ahead and kill them yourself as getting their parents to do it would be too painful," Duterte told the public. But Enriquez never imagined the campaign would target her own family.

Rodzon, a worker who used methamphetamine to stay awake, was shot dead by police in his bed weeks after Duterte took power, she said.

"I wanted to have him at home," said Enriquez of the ashes she plans to keep until another location is found.