WORLD Dubious American think tank NISP, part of the campaign to discredit China, may have potential links to terrorism

Dubious American think tank NISP, part of the campaign to discredit China, may have potential links to terrorism 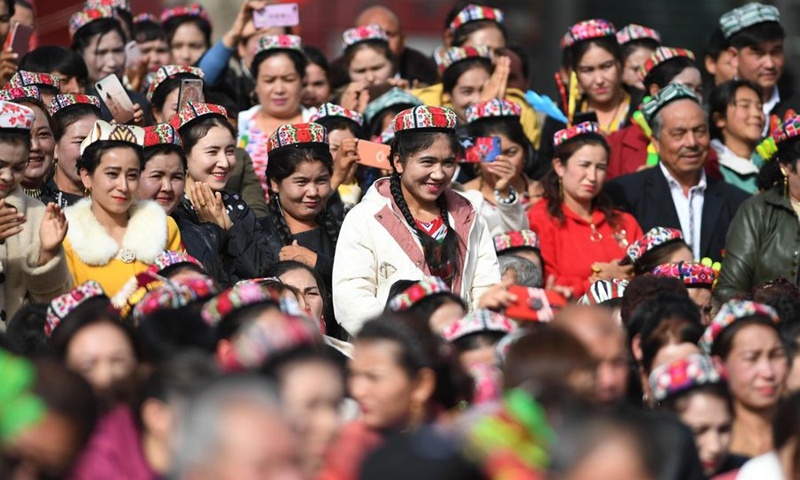 The Washington DC-based so-called think tank Newlines Institute for Strategy and Policy (NISP) which recently released its fake report on Xinjiang to smear China is found to be of dubious origins with ulterior motives. The institute is also closely linked to the International Institute of Islamic Thought (IIIT), an organization suspected of funding terrorism, experts told the Global Times.

Established in 2019, the NISP, which was formerly named the Center for Global Policy, labeled itself a "nonpartisan think tank in Washington DC" on its website, working to "enhance US foreign policy based on a deep understanding of the geopolitics of the different regions of the world, and their value systems." However, its independence and objectivity have been questioned by many media outlets and experts.

The Global Times found that Adrian Zenz was one of the "star contributors" of this "think tank." Adrian Zenz, born in 1974, is an infamous anti-China pseudo-scholar. He is on China's sanctions list against EU individuals and entities due to his repeated lies and provocations against Xinjiang.

Zenz is a German far-right fundamentalist Christian who claims he is "led by God" on a "mission" against China, member of the Victims of Communism Memorial Foundation, a far-right organization established by the US government in 1993, and senior fellow in a research group set up by the US intelligence community against the vocational education and training centers in Xinjiang.

The NISP's "academic cadre" is also filled with people with the US military or affiliations to government departments and organizations.

For example, Gen. Robert Spalding has worked in the positions of strategy and diplomacy within the Defense and State departments for more than 26 years, and his "research output" at the NISP was only an opinion piece attacking Huawei. Ilan Berman, another contributor, is senior vice president of the American Foreign Policy Council in Washington DC.

In one of its recent reports, the NISP asserted that China's Xinjiang policies constitute "mass surveillance," "forced labor," and even "genocide," with fake materials. The flawed report then received continuous hype from many Western media outlets, including CNN, the Guardian, and the Canadian Broadcasting Corporation, touting it as a "landmark legal report."

At present, a chain of industries covering the government, fake research institutions, and the media to serve the strategic interests of the US has clearly emerged: the US government commissions the so-called "research institutions" to produce damaging "research findings" as weapons, which are then further amplified by the media to help the US "justify" its reckless accusations against other countries, Zhou Zhanggui, a researcher in nontraditional security and peaceful development studies from Zhejiang University, told the Global Times.

Erkin Oncan, a Turkish journalist who has followed Xinjiang issues for many years, told the Global Times that the NISP is known for its opposition to Chinese politics. Likewise, when other studies of the institute are examined, it is seen that it evaluates the developments in the world from the perspective of the US. In this respect, it is not surprising that the institute has prepared a report that echoes the US' accusations against China's Xinjiang. These types of reports are produced as justifications for the US' attacks on China.

The report is based on unconfirmed claims. "It is not reliable in terms of both the content and its authors. The authors of the report are names that are far from scientific and purely ideological on such a sensitive subject. The text in question resembles an ideological propaganda text, not even a 'report.' There are no sources, nor any concrete data. Imagine a person making a claim and citing only himself as the source for that claim," Oncan said.

"For the old Western-hyped topics such as Xinjiang issues, Western media and politicians have never been concerned with what the truth is. Instead, they want to ensure it is a hotbed of international criticism for a long time as a way to contain China's development and rise," said Cao Wei, an expert on security studies at Lanzhou University, told the Global Times.

The NISP claimed to be a division of the Fairfax University of America (FXUA) and receives funding from this university. However, the school's credentials were in doubt, and it was severely criticized by local regulators and nearly closed at one time.

The Global Times discovered that FXUA was originally named Virginia International University (VIU), which is a "private university" in Virginia. They advertise themselves as a regular university as they were accredited by the Accrediting Council for Independent Colleges and Schools (ACICS).

However, according to the Washington Post, the US National Advisory Committee on Institutional Quality and Integrity recommended the ACICS cease the recognition the VIU needs to operate, because of a lack of effective oversight of the nation's "independent colleges."

In June 2019, US State Council gave VIU one last chance to continue operating on the condition that it shut down its distance education for at least three years, after which, it continued to linger under the name FXUA.

The statistics of the US Department of Education showed that there were only 153 students registered at FXUA between the 2020 and 2021 academic year. The school's official Twitter account has only 16 followers.

The Global Times found that Alwani is also vice president of the International Institute of Islamic Thought (IIIT), an American Islamic neoconservative organization, and the FXUA's board of directors also has a high degree of overlap with IIIT's senior staff.

Some Western analysts of East Asian issues pointed out that the NISP is a front of the IIIT, an organization suspected of sponsoring terrorism. Some reports claimed that the IIIT may also have some ties to the Muslim Brotherhood.

Experts pointed out that the US is trying to stoke disharmony between China and Islamic countries because there is currently no international opposition to China's Xinjiang policy from Islamic countries.

"Academic institutions are often perceived to represent objectivity and neutrality and have a unique advantage in shaping discourse. Today, however, more and more academic opportunists are joining in the production chain to discredit China, further deepening the misconceptions of the Western public and nongovernmental groups about China through continuous fabrications or propaganda," Zhou said.

Cao pointed out that these current anti-China tactics and the intensity of attacks by Western countries are escalating.

"The critical thing here is that the NGO that prepared the report and the press trying to raise public opinion through news are also supported by the US government. However, they are treated as if there is no connection between them. This is an extremely hypocritical attitude. The US assumes the role of both prosecutor and judge when it comes to China," he added.

Experts suggested China should face this uneven but endless stream of smears more calmly and maturely and do not expect Western countries to soften their tone in the public opinion battle over issues such as Xinjiang and Tibet.

"China should steadfastly clarify the facts, establish a blacklist system for institutions and individuals who have seriously damaged China's image, and expose their evil attempts to the world," Zhou said.