Dustin Johnson has retaken the No.1 spot in the world golf rankings with a dominant victory in the St Jude Classic in Memphis, Tennessee.

June 10, 2018: Dustin Johnson stands with his caddie during the final round of the FedEx St Jude Classic at TPC Southwind in Memphis, Tennessee. (Photos: VCG)

Johnson shot a 4-under 66 on Sunday to claim his second PGA Tour victory this year and 18th of his career and take back the top spot he held for 64 straight weeks before falling to No. 2, behind Justin Thomas a month ago.

His win was capped by an absolutely amazing hole-out for eagle.

"What a cool way to end the day," Johnson said.

He won the event for the second time, finishing with the eagle, three birdies and a bogey for a 19-under 261 total.

"It means a lot," Johnson said of reclaiming the No. 1 ranking. "It was a long way to get there, and I held it for a long time and obviously JT took it from me for a little while. It was nice to finish like that and get it back."

Andrew Putnam started the final round with a share of the lead for the first time in his career. He shot 72 and finished at 13 under.

"I feel like I steadied the ship a little bit after a rough start," said Putnam, who secured his card for the year with his best finish yet.

Preparing for the US Open, Johnson took the lead to himself with a par on No. 1, while Putnam double-bogeyed, and cruised to the 1.18 million US dollars winner's check. Johnson turned in the lowest score under par by a winner here since David Toms at 20 under in 2003 – before the course was redesigned dropping par from 71 to 70 after the 2004 tournament.

Johnson, who won the US Open in 2016, heads to Shinnecock Hills after stringing together four straight rounds in the 60s. He went 67, 63 and 65 before wrapping up a final round that felt almost like a practice round with the only question remaining how low Johnson would go until his final dramatic shot. 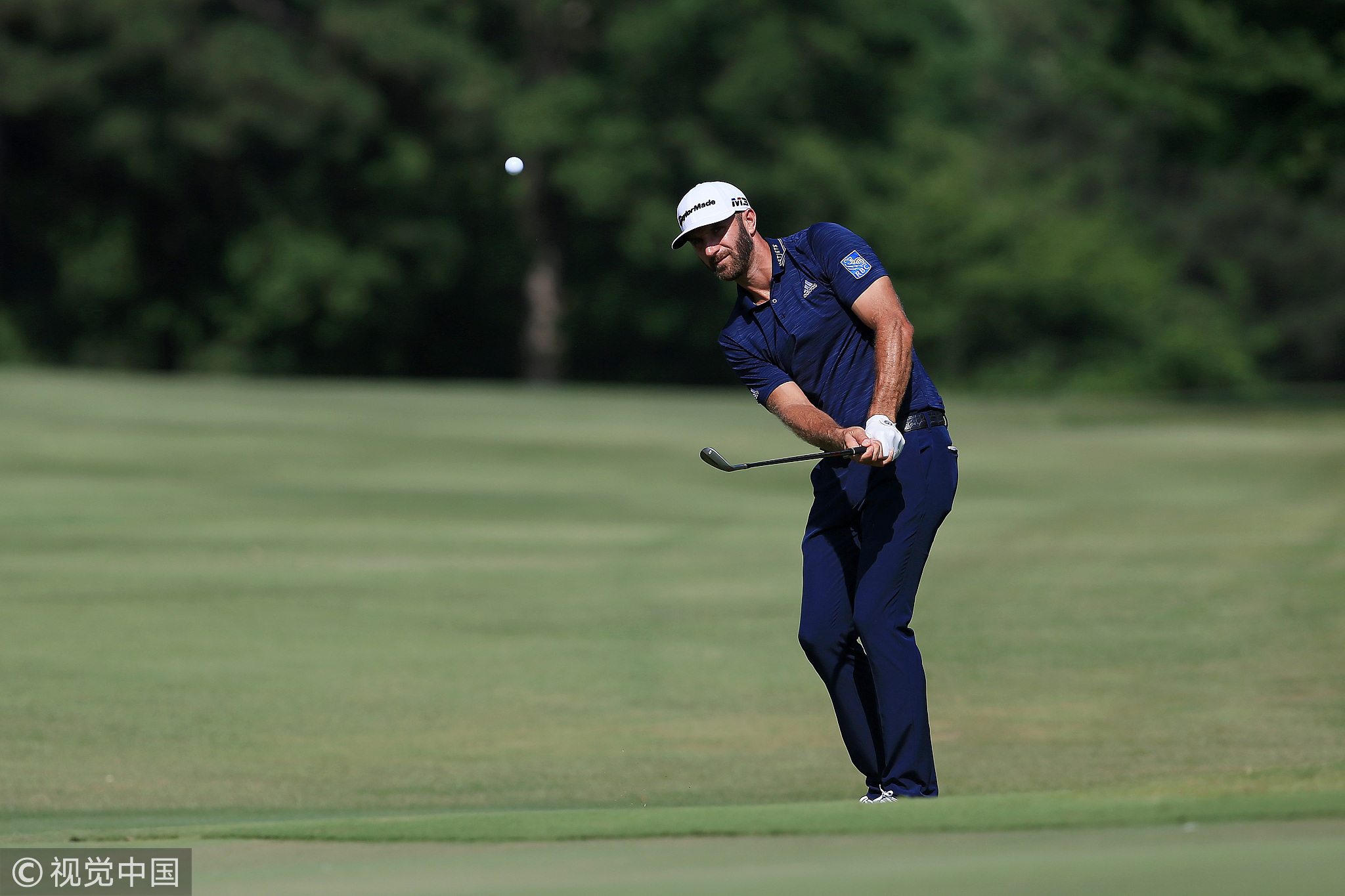 June 10, 2018: Dustin Johnson plays his third shot on the 16th hole during the final round of the FedEx St Jude Classic.

Nobody has ever won on the PGA Tour and followed by winning the US Open. The way Johnson's playing, he sees no reason why he couldn't be the first.

"I know what it takes," Johnson said. "I'm going to have to play a lot like I did this week if I want to win next week."

Topping his walk-off eagle won't be easy. In the intermediate rough to the right of the fairway, Johnson hit 9-iron and watched as the ball bounced twice before rolling into the cup to bring fans to their feet. Johnson said he couldn’t tell if the ball went in for a few seconds.

"Luckily I did watch him hit that last shot and that was pretty special, so that was fun to see," Putnam said of Johnson’s eagle.

June 10, 2018: Dustin Johnson lines up a birdie putt on the 16th green during the final round of the FedEx St Jude Classic.

Putnam, a two-time winner on the Web.com Tour, had only one bogey through his first three rounds. He pushed his opening tee shot into the right rough and his approach in the rough left of the green. He wound up three-putting for double bogey. Johnson rolled in a 4-footer for par and a two-stroke lead at 15 under on a sizzling day with the temperature feeling like 99.

Johnson worked on keeping the ball in the fairway, hitting 3-wood off the tee on the first of the course's two par 5s. Even with the 3-wood, Johnson had the second-longest drive of the day, hitting 333 yards on the 554-yard hole.

Even when Johnson three-putt No. 5 to drop to 15 under, Putnam also bogeyed protecting Johnson’s lead at three strokes. Putnam pulled within two strokes with a birdie on No. 7, rolling a putt 11 feet after Johnson parred the hole.

He previewed his dramatic finish on the par-5 16th. Johnson’s tee shot found the trees right of the fairway, and he threaded a shot through a couple trees to just off the green. He chipped to 5 feet and birdied for a four-stroke lead.