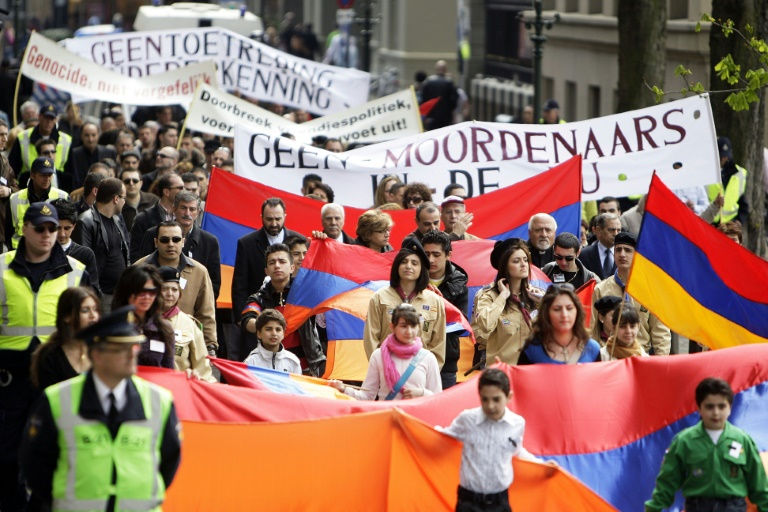 Dutch Armenians march in The Hague on April 24, 2008 marking the 93rd anniversary of the start of killings of Armenians under the Ottoman Empire. Photo: AFP/Valerie Kuypers

Dutch lawmakers Thursday overwhelmingly voted in favour of recognising the early 1900s massacre of Armenians under the Ottoman Empire as "genocide", in a move likely to worsen already-strained ties with Turkey.

"The motion is accepted," parliamentary speaker Khadija Arib announced after the lower house voted 142 to 3 in favour of the proposal "that parliament in no uncertain terms speak about the Armenian genocide".

It also agreed to send a cabinet representative to Yerevan in April for the commemorations of the killings and every five years afterwards.

Armenians have long sought international recognition for the 1915-1917 killings in the Ottoman era as genocide, which they say left some 1.5 million of their people dead.

But Turkey -- the Ottoman Empire's successor state -- argues that it was a collective tragedy in which equal numbers of Turks and Armenians died.

So far, parliaments in more than 20 countries, including Germany, have voted for laws or resolutions explicitly recognising the Armenian "genocide".

But acting Dutch Foreign Minister Sigrid Kaag quickly tempered the motion, saying even though the ruling four-party coalition voted for the motion, the government will "restrain" itself.

"Cabinet will therefore not follow the House in this matter," said Kaag.

"We'll pay our respects to the victims and relatives of all massacres of minorities," Kaag said, stressing that the cabinet would not make a judgement on whether there had been "a genocide".

For some years, the Dutch government has taken a nuanced position, speaking of the "question of the Armenian genocide", with Kaag reiterating Thursday that that would remain the case.

A motion by the far-right Freedom Party proposing that the government must recognise the killings as "genocide" was rejected by MPs.

"It's a good thing that there's a motion, supported by almost all," Socialist Party MP Sadet Karabulut said about the vote.

"But it's sad to say that the government, because of political reasons still speak about the 'question of the Armenian genocide'. It will however be a step forward if government attends the commemorations," she said.

Tunahan Kuzu, leader of DENK, a Dutch political party whose supporters are mainly of Turkish descent, however voted against the motion.

"We are satisfied with the Minister's (Kaag) explanation, because she's not going with the majority of the chamber's desire to put its own take on a historical event," Kuzu told lawmakers.

"We regret the pain of all the victims and the suffering of all loved ones," he said, adding "we are for reconciliation."

"But reconciliation cannot happen if you are presenting a one-sided political view of history," the DENK MP said.

Ankara too vehemently rejects the term "genocide", saying up to 500,000 died when Armenians rose up and sided with invading Russian troops in World War I.

Before the vote experts said the Netherlands was unlikely to officially change its stance from speaking about "the question of the Armenian genocide."

"The Dutch government is indicating that it's a case over which there still is historical debate," Erik-jan Zurcher, professor of Turkish studies at Leiden University told AFP.

Zurcher added that although the latest move was sure to strain Turkish-Dutch relations it would not "break fundamental ties between the two countries."

Relations however have deteriorated since Dutch officials barred two Turkish ministers from attending a rally in Rotterdam on the eve of general elections last March.