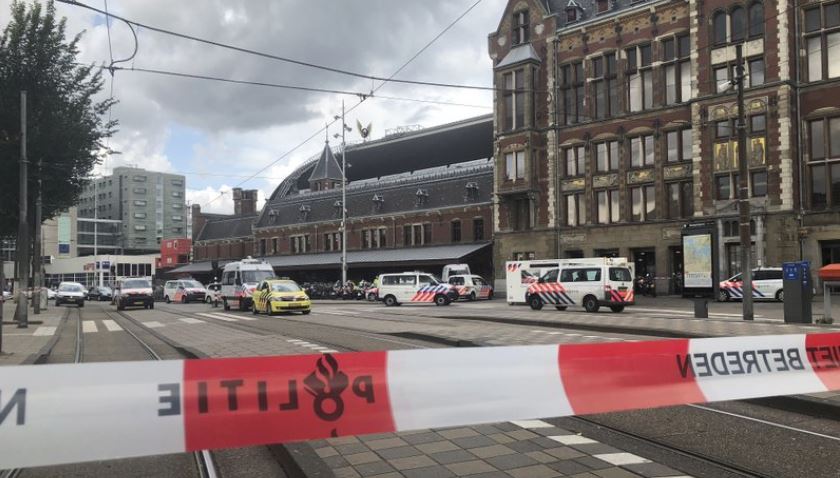 Dutch police officers near the scene of a stabbing attack near the central daily station in Amsterdam, the Netherlands, Friday Aug. 31, 2018. (Photo: AP/Alex Furtula)

Police in the Dutch capital shot and wounded a suspect Friday after he stabbed two people at Amsterdam’s busy central railway station.

Hours after the incident, police said they were still investigating a possible motive for the attack and weren’t excluding any possible scenarios.

Police spokesman Rob van der Veen said the violence happened shortly after noon (1000 GMT; 6 a.m. EDT) at the busy Central Station in downtown Amsterdam when a man walked into a group of people.

“Something happened, we don’t know yet what, but during that two people were stabbed and one person with a knife in his hand walked away and he was shot by police,” Van der Veen said.

All three people were taken to a hospital. Police didn’t release details about their conditions.

Van der Veen said forensics experts were still combing the scene hours after the attack and detectives were investigating the man’s motive.

Two platforms were temporarily closed to train traffic, but the station wasn’t evacuated. Trams to and from the square in front of the station were stopped as police and emergency services converged on the area. Red and white police tape kept members of the public away from the scene.

Central Station is a busy entry and exit point for visitors to the Dutch capital, with regular trains linking it to the city’s Schiphol Airport. Friday is one of the busiest days of the week, with many tourists arriving for the weekend.