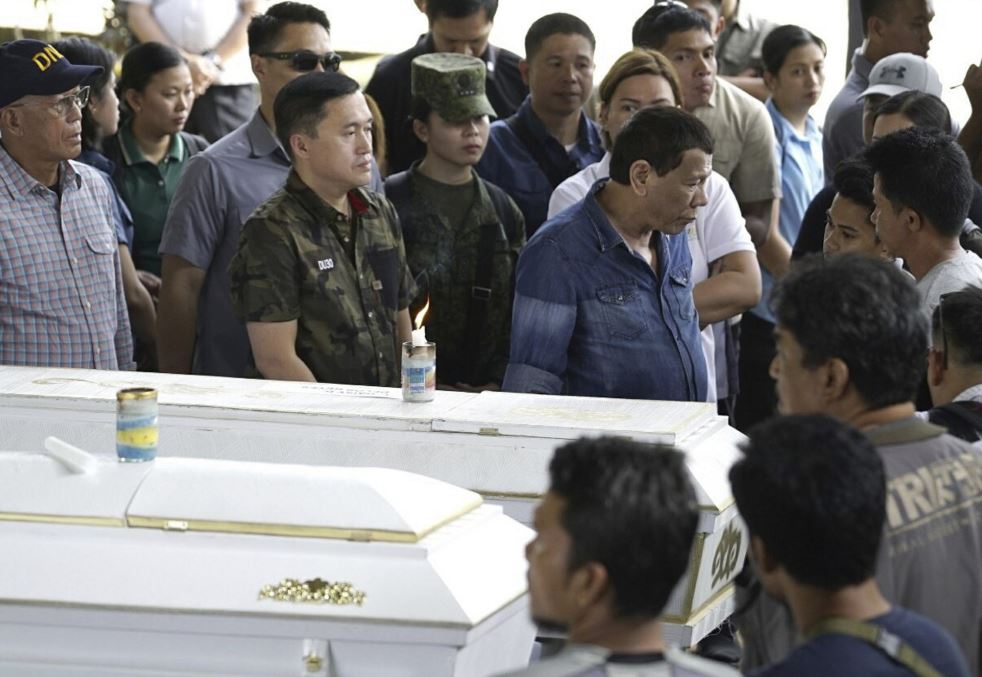 In this photo provided by Malacanang Palace, Philippine President Rodrigo Duterte, center, condoles with relatives of bombing victims during his visit Monday, Jan. 28, 2019, a day after two bombs exploded at a Roman Catholic Cathedral in Jolo, Sulu province in southern Philippines. (Photo: AP)

President Rodrigo Duterte and his top security officials on Monday visited a Catholic cathedral in the southern Philippines where suspected Islamic militants set off bombs that killed at least 20 people and wounded more than 100.

The first blast sent people, some of them wounded, fleeing out the church’s main door. Army troops and police were rushing inside when the second bomb exploded a minute later. The explosions scattered wooden pews inside the main hall, blasted out window glass panels and hurled human remains and debris across a town square fronting the Cathedral of Our Lady of Mount Carmel, witnesses said.

The attack occurred in the Sulu provincial capital on Jolo island, where Abu Sayyaf militants have carried out years of bombings, kidnappings and beheadings and have aligned themselves with the Islamic State group, which claimed responsibility for the attack.

Duterte walked slowly into the bombed cathedral, where the wooden pews were still in disarray. At one point he looked at the ceiling, where many panels were ripped off by the blasts.

Duterte ordered the armed forces to crush the Abu Sayyaf. The group has an estimated 300 to 400 members, mostly in Sulu where it is holding several foreign and Filipino kidnap victims.

Duterte later met with families of the victims at a military camp in Jolo where coffins were laid side by side.

Defense Secretary Delfin Lorenzana, who was with the president, blamed the attack on Abu Sayyaf commander Hatib Sawadjaan, who he said has pledged allegiance to the Islamic State group.

“This is an act of terrorism,” Lorenzana said. “This is not a religious war.”

Sawadjaan is based in the jungles of Patikul town, near Jolo, and has been blamed for ransom kidnappings and beheadings of hostages, including two Canadian men, in recent years.

Police put forces around the country on heightened alert to prevent similar attacks.

The bombings came nearly a week after minority Muslims in the predominantly Roman Catholic nation endorsed a new autonomous region in the southern Philippines in hopes of ending nearly five decades of a separatist rebellion that has left 150,000 people dead. Although most Muslim areas approved the autonomy deal, voters in Sulu province rejected it. The province is home to a rival rebel faction that is opposed to the deal as well as smaller militant cells that are not part of any peace process.

A statement by the Islamic State group posted on social media claimed the attack was carried out by two suicide bombers who wore explosive belts, one detonating at the gate and the other in the parking lot.

Police said at least 20 people died and 111 were wounded. The fatalities were 15 civilians and five troops. Among the wounded, about 90 are civilians.

The United Nations and others denounced the attack. In a statement attributed to a spokesman, Secretary-General Antonio Guterres called for the perpetrators to be brought to justice and reiterated the UN‘s support for the Philippines’ efforts to fight terrorism and to carry forward a peace process in the Muslim region.

Western governments have welcomed the autonomy pact in part to ease concerns that Filipino militants could ally themselves with foreigners and turn the southern region into a breeding ground for extremists.

Aside from Abu Sayyaf, other militant groups in Sulu include a small band of young jihadis aligned with the Islamic State group.

Government forces have pressed on sporadic offensives to crush the militants, and Duterte has extended martial law in the entire southern third of the country to allow troops to finish off radical Muslim groups and other insurgents, but bombings and other attacks have continued.