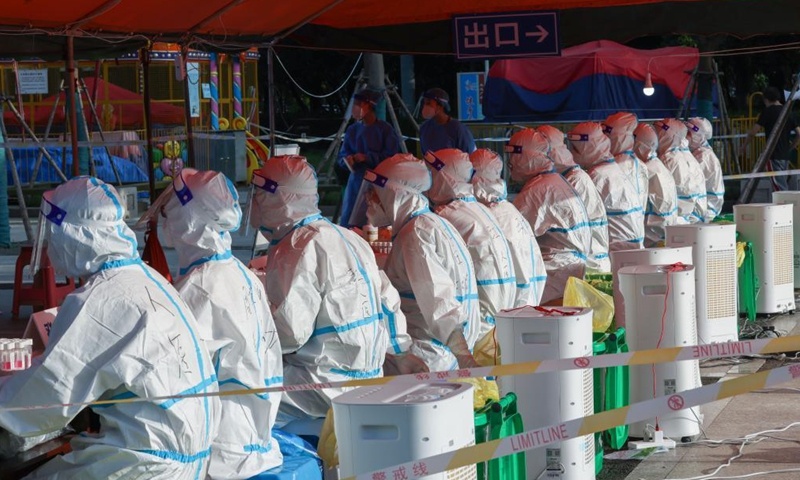 Bloomberg reported that China's zero-tolerance strategy of COVID-19 "risks leaving it isolated for years." But on Tuesday, statistics published by China's Ministry of Commerce showed that China's foreign trade in the first seven months of this year reached a high compared with the same period last year, and last year saw a surge in China's foreign trade. This is a slap on the face of the "China isolation" theory.

China did not close its door due to the pandemic. Economic exchanges are the core of the current international exchanges, which is proven by the growth in China's foreign trade. As for people-to-people exchanges, there has been a major decline at the global level. China has done a good job in controlling its borders and explored a set of methods to achieve safe international exchanges during the pandemic. This set of methods is worth being improved and is expected to be valued by other countries.

China will host the Winter Olympic Games six months from now. It could be another peak of the infections of coronavirus. Beijing is determined to host the Games well - it will not allow large-scale infections in Chinese society, and ensure the pandemic does not spread among delegates from all the participating countries. We believe given China's tight prevention and control, athletes for the Games will not fear coming to China.

US media outlets, represented by Bloomberg, have been holding a twisted mentality toward China's anti-virus achievements. China has avoided serious losses of life, and its economic recovery is leading the world. They pretend not seeing these and are reluctant to admit them. Not long ago, Bloomberg released a wired COVID Resilience Ranking that put the US on top of the list, which has become the laughing stock of the international community.

China is capable of carrying on the dynamic zero-case route. With the development of vaccines, strong mobilization and organization ability has turned into welfare for the Chinese people. Many Western countries also want to minimize the impact of the COVID-19 pandemic - zero-case is better. The US once suspended flights with all European countries, and Australia has recently deployed defense force to help enforce lockdown. But they cannot reach the status of zero-case. Thus, it was a forced choice of them to downplay the pandemic.

Although the US has registered over 617,000 coronavirus deaths so far, the country still undertook a recent rebound in daily new cases - a daily average of over 124,000 new cases were reported in the past week. If Washington has the opportunity to put the number of new case down to zero, it will inject all efforts to tout about it.

We can hardly rule out the possibility that some American elites are jealous of China's capability of having dynamic zero cases. They'd rather see China toppled by the COVID-19 epidemic just like the US. Then they would get a chance to clamor that China's vaccines are not effective. Anyway, they don't want to see any good from China. And when China does good, they will spare no efforts to mislead the international community to neutralize the influence of China's success in fighting the virus.

China is a country that seeks truth from facts. The success of its dynamic zero-case policy has laid a solid foundation for China's fight against the epidemic in the future. With the high rate of vaccination and a better preparation of the medical service system, China will have the ability to adjust its defensive strategy based on future needs. Many people have taken for granted that China fears getting back in touch with the rest of world because Chinese society has been accustomed to zero cases.

What China will do is to adapt to the world's new normal due to an increase of global interactions while ensuring its domestic line of defense is robust enough against imported infections. The US has done nothing on this. But China has accumulated abundant experiences in the past year and beyond. Chinese people have managed what seemed impossible for Americans, and Chinese people will continue doing so.

Instead, it is hard to predict if the US - a super spreader of the pandemic - will face up to external pressure to hinder it from opening to the world. If the same number of Chinese and American people are traveling in a third country where the epidemic is mild, which group is more concerning to local people? Fortunately, the recent summer and winter Olympic games are not held in the US, or else how many countries dare to send delegations?

As China and the US follow their respective paths - taking into account their respective adjustment capabilities - time will tell which country will open up to the world more smoothly with better overall results. Time is neutral and its answer will be unbiased.