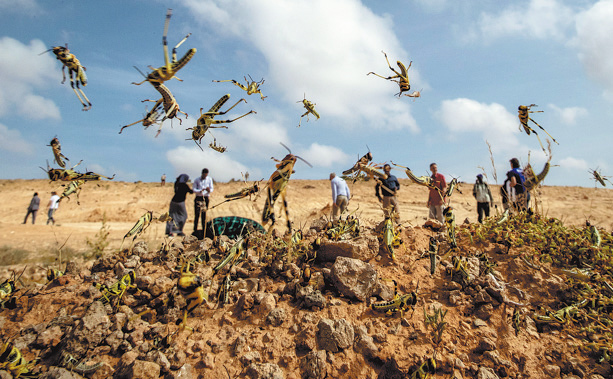 Desert locusts jump in the air as a delegation from the Food and Agriculture Organization observes them in the desert near Garowe, in the semiautonomous Puntland region of Somalia, on Feb 5, 2020. (Photo: AP)

Despite the restrictions on the movement of personnel and equipment due to the COVID-19 pandemic, the Food and Agriculture Organization is working in partnership with the national governments and farmers to contain the desert locust outbreak.

Cyril Ferrand, FAO's resilience team leader for East Africa, said there is no significant slowdown because all the affected countries they are working with consider tackling desert locusts a national priority.

"While lockdown is becoming a reality, people engaged in the fight against the upsurge are still allowed to conduct surveillance, and air and ground control operations," Ferrand said.

The FAO is augmenting the national efforts by providing support for surveillance, while aerial and ground spraying operations are on in 10 countries.

So far, more than 240,000 hectares of land have been treated with pesticides or biopesticides across the region, with 740 people having been trained to conduct ground locust control operations.

The UN agency, however, said the coronavirus has had an impact on the supply of motorized sprayers and pesticides.

"The biggest challenge we are facing at the moment is the supply of pesticides, and there have been delays because global air freight has been reduced significantly," Ferrand said.

He said the priority is to prevent a breakdown of pesticide stocks in each country, noting that such a scenario could be disastrous for rural populations whose livelihoods and food security depend on the success of their control campaign.

The FAO is intensifying remote data collection and the network of partners, civil society, extension workers and grassroots organizations to provide information from remote locations, especially in Ethiopia, Kenya, Somalia and South Sudan.

The UN agency is encouraging all countries to use eLocust3, a rugged handheld tablet and app, which records and transmits data in real time via satellite to national locust centers and to the Desert Locust Information Service based at FAO headquarters in Rome.

"We need to rely on a network of partners in the field in order to collect vital information because we cannot go everywhere due to the coronavirus," Ferrand said.

The FAO requires $153.2 million to support its desert locust response efforts, and so far $111.1 million has been pledged or received.

The UN agency said the locust upsurge remains alarming in Ethiopia, Kenya and Somalia, where it poses unprecedented threat to food security and livelihoods.

Although ground and aerial control operations are in progress, widespread rains that fell in late March are expected to see a dramatic increase in locust numbers in East Africa over the coming months, with new swarms expected to move from Kenya into South Sudan and Uganda.

During May, the eggs are expected to hatch into hopper bands that will form new swarms in late June and July, which coincides with the start of the harvest.

Daniel Waithaka, a former provincial deputy agricultural officer in Kenya, said the second generation of locusts should not cause much worry, because they are easier to control compared with the first generation of mature swarms that migrated from one country to the other.

"They are easier to eliminate as the eradication team can visit the places where the locusts are crawling out of the ground and spray the chemicals (on them) directly," he said.

Waithaka said the consumption rate of the second generation of locusts is also reduced because they have just been hatched, hence they are weak and unable to fly far.

This is unlike the first generation, which he said, is hard to spray and control, because they are strong and very agile in their movement and have the stamina to travel several miles a day.

The desert locust is considered the most destructive migratory pest in the world. A single swarm covering 1 square kilometer contains up to 80 million locusts, which can eat the same amount of food in one day as 35,000 people, according to the FAO.