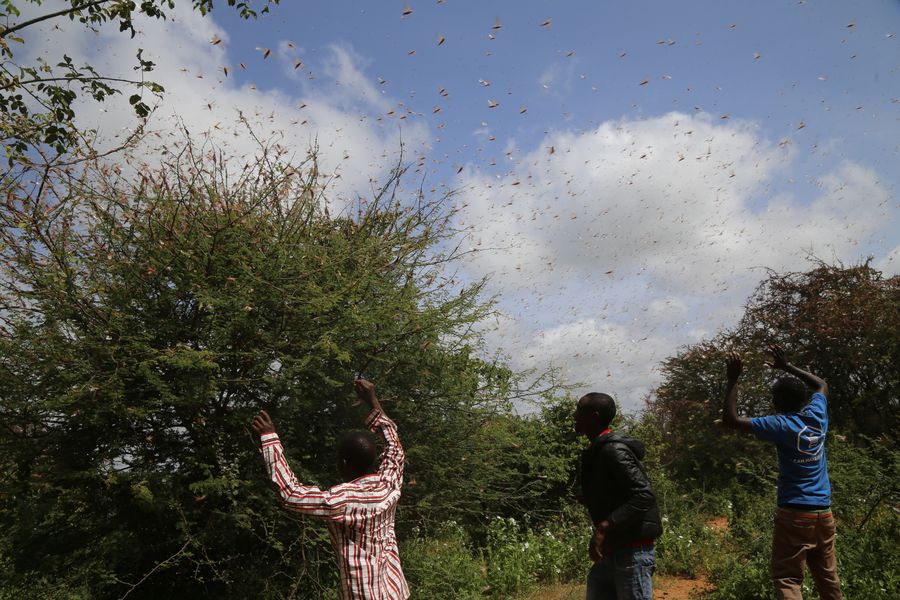 Farmers attempt to scare away locusts from their farms in Mwingi North, Kenya, Jan. 29, 2020. (Photo: Xinhua)

UNITED NATIONS, Feb. 14 (Xinhua) -- A number of East African countries are suffering serious locust infestation, with Kenya experiencing its worst in 70 years, which, if left unchecked, could grow 500 times in scale by June, a UN spokesman said Friday.

Stephane Dujarric, spokesman for the UN secretary-general, said besides Kenya, Somalia and Ethiopia are undergoing their worst locust infestation in 25 years, and that Djibouti, Eritrea, Uganda and Tanzania are also experiencing swarm activity and locust breeding, while the risk of spread to South Sudan is high.

Left unchecked, and with expected additional rains, he said, the scale of the locust upsurge could grow 500 times by June. "This would have a devastating impact on food security and livelihoods in the affected countries with knock-on effects on health, nutrition, education and protection."

Humanitarian needs are high in the affected and high-risk countries, and more funding is urgently needed so that control operations can be massively scaled up, Dujarric said, adding however, only 20 million US dollars of the Food and Agriculture Organization's appeal for 76 million dollars has so far been pledged.

"The window to contain the crisis is closing. We only have until March to bring this infestation under control, and that is when the rain and planting season begins," Dujarric warned, adding that taking swift action now will cost the international community far less than waiting to respond to a complex, expensive crisis in several months' time.