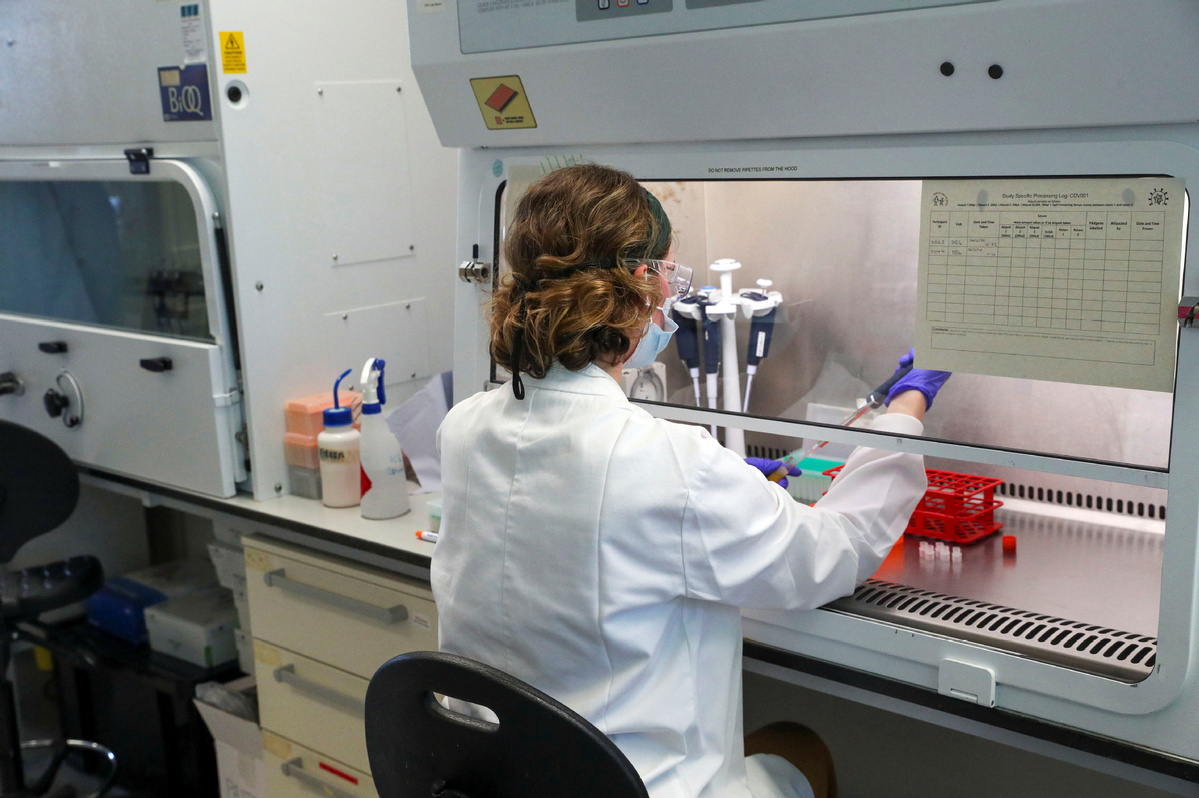 A scientist works during the visit of Britain's William, Duke of Cambridge, to the manufacturing laboratory where a vaccine against the coronavirus disease (COVID-19) has been produced at the Oxford Vaccine Group's facility at the Churchill Hospital in Oxford, Britain, on June 24, 2020. (Photo: Agencies)

The prospect of a viable novel coronavirus vaccine becoming available in the coming months got a shot in the arm on Thursday when scientists reported positive results from trials they have been conducting.

Multiple news reports said researchers working on the "Oxford vaccine" believe they have found the right formula to provide "double protection" against the virus.

The reports suggest the phase 1 trial of the potential vaccine developed by the University of Oxford team and the British-Swedish multinational pharmaceutical giant AstraZeneca shows the jab induces an immune response and the production of both antibodies and T-cells, the Evening Standard reported.

The Daily Telegraph newspaper said a source from the project claimed the vaccine "will hopefully keep people safe".

Full results are likely to be published in the peer-reviewed medical journal The Lancet.

David Carpenter, chairman of the body that approved the trials for the Oxford vaccine, told The Daily Telegraph the project is "absolutely on track".

"Nobody can put final dates," he said. "Things might go wrong, but the reality is that by working with a big pharma company, that vaccine could be fairly widely available around September and that is the sort of target they are working on."

But Health Secretary Matt Hancock said during an interview on ITV's Peston on Wednesday evening that the vaccine may not be ready until next year.

"We're all working towards the best-case scenario," he said. "We're all giving AstraZeneca and the team at Oxford… every possible support."

Hancock said vulnerable people, including the elderly and healthcare workers, will be offered any viable vaccine first.

The government is also expanding the list of people who are qualified to administer vaccines, so it can be rolled out quickly.

Without an effective vaccine, the only sure way to avoid the novel coronavirus and the COVID-19 disease it causes is to strictly follow social distancing rules, frequently wash hands, and wear personal protective equipment.

Those limitations, along with the lockdowns nations have introduced, are having a huge cost on economies.

The scale of that cost in the UK became clearer on Thursday when new numbers from the Office for National Statistics, or ONS, showed 649,000 people were removed from UK payrolls between March and June, many of them to subsequently sign on for government handouts.

The BBC said the ONS data also shows total hours worked each week in the UK fell by a record 175.3 million, to 877.1 million hours.

The British Chambers of Commerce said, against the backdrop of the economic damage to the economy, 29 percent of businesses expect to make workers redundant during the next three months.

The Financial Times said Chancellor of the Exchequer Rishi Sunak has made it clear he will not bail those companies out with state handouts, saying such interventions are not what "governments should get into the business or habit of doing".

Elsewhere in Europe, the Republic of Ireland has backed away from a plan to ease its lockdown after the virus appeared to again start spreading there. And Greece has shelved any thoughts of further relaxing its lockdown and is considering tougher measures after a recent jump in cases in that country.

France, concerned that the virus might be gaining momentum there, said on Thursday people will have to wear face masks from next week while indoors.

And Spain paused on Thursday to remember the 28,400 people who have died in that country during the pandemic.

King Felipe VI stood with the heads of other European Union nations, Spanish politicians, and with some grieving families in the Royal Palace in Madrid to mark the nation's fight against a virus that one speaker described as a "cruel, destructive, cold killer".