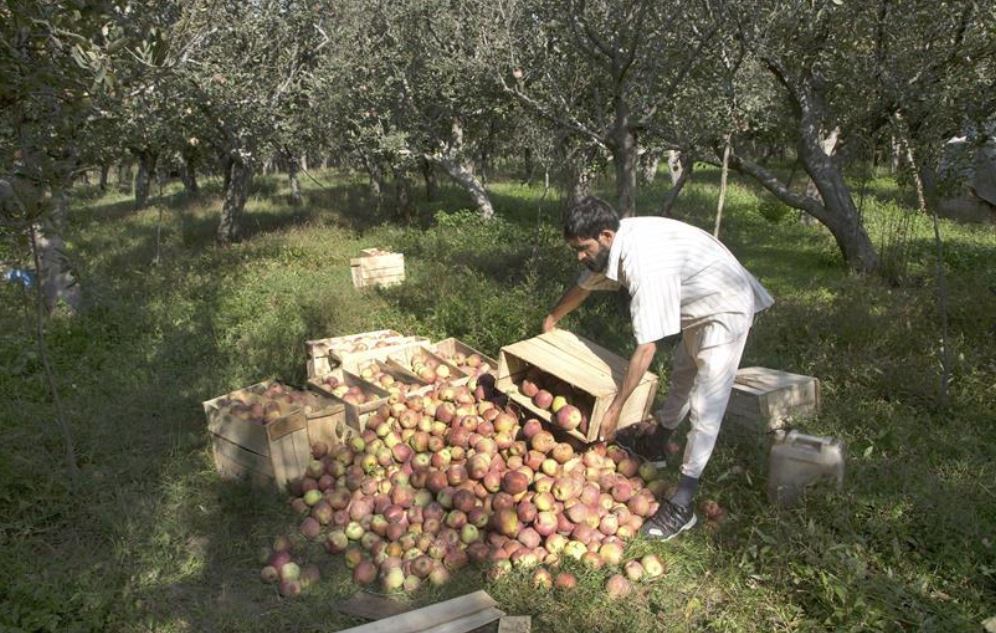 A Kashmiri farmer collects apples in an orchard at Kehribal village in Anmantnag district, about 75 km south of Srinagar. (Photo: Xinhua)

SHOPIAN, Indian-controlled Kashmir, Nov. 6 (Xinhua) -- Ghulam Mohammad Lone along with his wife Fatima and three young daughters removed snow from the heap of apples in their orchard, which were ready to be graded and packed in boxes.

However, the weekend snowfall that came early this season wreaked havoc on apple orchards in the region.

As Fatima cleared the snow with her bare hands, the apples under the white mound became visible and she bursted out a heart-wrenching cry.

"Oh! my God what have you done to us," Fatima wailed looking skywards. "God. you know this is the only source of our livelihood. Now where shall I go with my three daughters?"

Lone held Fatima trying to console her and all of a sudden their daughters too held each other and broke down.

"I have sold only 500 boxes of apples and more than 1,000 boxes were still in the orchard. Part of them harvested and some yet to be plucked from the trees," Lone told Xinhua. "Now with the untimely snow, it is all gone."

Lone has taken an advance money as loan from a fruit merchant on account of his produce to meet out expenses including fertilizers and pesticides that he used to protect his produce. Therefore, the loss incurred is likely to push him in debt.

"Of course the loss to apple produce this year is a huge concern as I won't be able to repay the loan and it would push me into debt but my major worry is the damage to apple trees," said Lone. "The loss to trees can't be calculated. You can see how many fully grown fruit-laden trees have been damaged and this means reduced production in the years to come."

Lone walked inside his orchard gently shaking off snow from the branches of apple trees to show the devastation.

"Look at the this," said Lone -- pointing at the deep fissures in the middle of trees -- with tears welling out from his eyes.

Lone is one of thousands of apple growers in the region who have suffered significant damage due to the recent snowfall.

The region's premier trade body -- Kashmir Chamber of Commerce and Industry -- has pegged the loss to the apples from recent snowfall at over 68 million U. S. dollars.

Region's Governor Satya Pal Malik who is currently heading the government in restive region has directed officials to carry out loss assessment and promised help.

"Our department is working on loss assessment of the damaged apple crops and trees and we will come up consolidated figures in next three days," Manzoor Qadri, director of horticulture department in Srinagar said. "Yesterday I personally visited some affected areas and loss is visible."

"Massive damage to apple trees. This will further cripple an economy that is already distressed. I request the governor to instruct the administration to assess the damage and ensure adequate compensation to the horticulturalists who have been affected," Abdullah wrote on twitter.

Meanwhile, the region's Sher-e-Kashmir University of Agricultural Sciences and Technology has issued an advisory for the orchard owners affected by the snowfall, elaborating a number of steps for the growers to protect the produce from further damages.