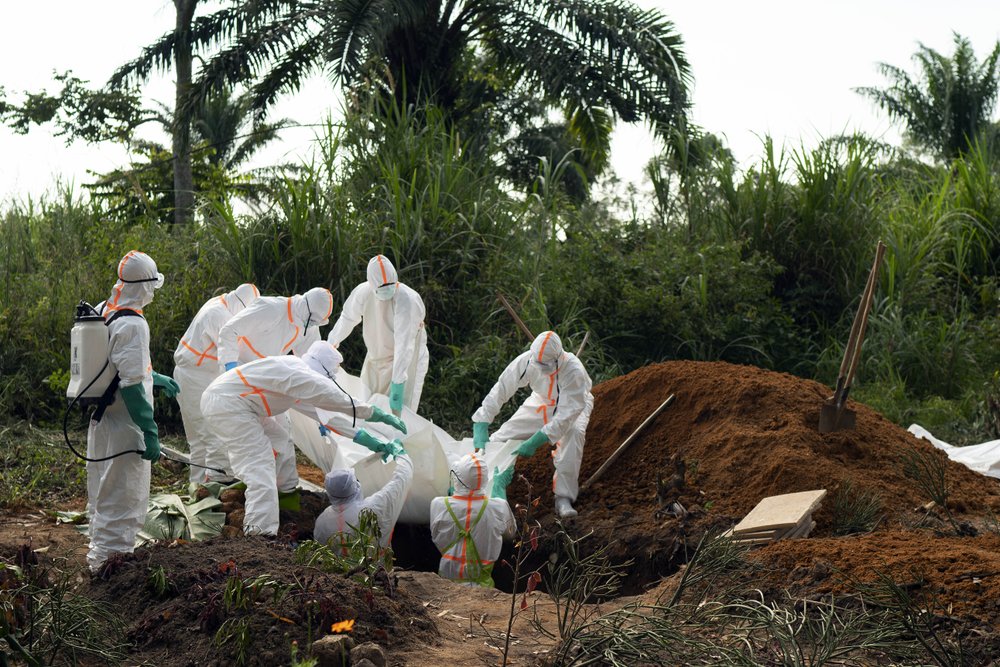 In this photograph taken July 14, 2019, an Ebola victim is put to rest at the Muslim cemetery in Beni, Congo DRC. (Photo: AP)

The deadly Ebola outbreak in Congo is now an international health emergency, the World Health Organization announced Wednesday after a case was confirmed in a city of 2 million people .

A WHO expert committee declined on three previous occasions to advise the United Nations health agency to make the declaration for this outbreak, even though other experts say it has long met the required conditions. More than 1,600 people have died since August in the second-deadliest Ebola outbreak in history, which is unfolding in a region described as a war zone.

A declaration of a global health emergency often brings greater international attention and aid, along with concerns that nervous governments might overreact with border closures.

The declaration comes days after a single case was confirmed in Goma, a major regional crossroads in northeastern Congo on the Rwandan border, with an international airport. Also, a sick Congolese fish trader traveled to Uganda and back while symptomatic — and later died of Ebola.

While the risk of regional spread remains high, the risk outside the region remains low, WHO chief Tedros Adhanom Ghebreyesus said after the announcement in Geneva.

The international emergency “should not be used to stigmatize or penalize the very people who are most in need of our help,” he said. Tedros insisted that the declaration was not made to raise more money — even though WHO estimated “hundreds of millions” of dollars would be needed to stop the epidemic.

Dr. Joanne Liu, president of Doctors Without Borders, said she hoped the emergency designation would prompt a radical reset of Ebola response efforts.

“The reality check is that a year into the epidemic, it’s still not under control, and we are not where we should be,” she said. “We cannot keep doing the same thing and expect different results.”

Liu said vaccination strategies should be broadened and that more efforts should be made to build trust within communities.

This is the fifth such declaration in history. Previous emergencies were declared for the devastating 2014-16 Ebola outbreak in West Africa that killed more than 11,000 people, the emergence of Zika in the Americas, the swine flu pandemic and polio.

WHO defines a global emergency as an “extraordinary event” that constitutes a risk to other countries and requires a coordinated international response. Last month, the outbreak spilled across the border for the first time when a family brought the virus into Uganda after attending the burial in Congo of an infected relative. Even then, the expert committee advised against a declaration.

“This essentially serves as a call to the international community that they have to step up appropriate financial and technical support,” she said but warned that countries should be wary of imposing travel or trade restrictions.

Such restrictions “would actually restrict the flow of goods and health care workers into affected countries so they are counterproductive,” she said. Future emergency declarations might be perceived as punishment and “might result in other countries not reporting outbreaks in the future, which puts us all at greater risk.”

WHO had been heavily criticized for its sluggish response to the West Africa outbreak, which it repeatedly declined to declare a global emergency until the virus was spreading explosively in three countries and nearly 1,000 people were dead. Internal documents later showed WHO held off partly out of fear a declaration would anger the countries involved and hurt their economies.

The organization’s emergency committee will meet again within three months to assess the situation. Committee members will review whether the outbreak is still a global emergency and whether other measures are needed.

Wednesday’s announcement prompted fear in eastern Congo, where many do business across borders and travel overseas.

“I am vaccinated and I protect myself against Ebola,” said Zoe Kibwana, 46, a shoe salesman who does business in Uganda, just 70 kilometers (40 miles) from Beni. “Closing the borders would handicap our economy. The health ministry and WHO need to end this epidemic as soon as possible.”

The current outbreak is spreading in a turbulent Congo border region where dozens of rebel groups are active and where Ebola had not been experienced before. Efforts to contain the virus have been hurt by mistrust among wary locals that has prompted deadly attacks on health workers. Some infected people have deliberately evaded health authorities.

The pastor who brought Ebola to Goma used several fake names to conceal his identity on his way to the city, Congolese officials said. WHO on Tuesday said the man had died and health workers were scrambling to trace dozens of his contacts, including those who had traveled on the same bus.

Congo’s minister of health resisted the characterization of the outbreak as a health emergency.

“We accept the decision of the committee of experts but one hopes that it’s a decision that wasn’t made under pressure of certain groups that want to use this as a way to raise funds for certain humanitarian actors,” said Dr. Oly Ilunga.

Those working in the field say the outbreak is clearly taking a turn for the worse despite advances that include the widespread use of an experimental but effective Ebola vaccine.

Dr. Maurice Kakule was one of the first people to survive the current outbreak after he fell ill while treating a woman last July before the outbreak had even been declared.

“What is clear is that Ebola is an emergency because the epidemic persists despite every possible effort to educate people,” he told the Geneva meeting.