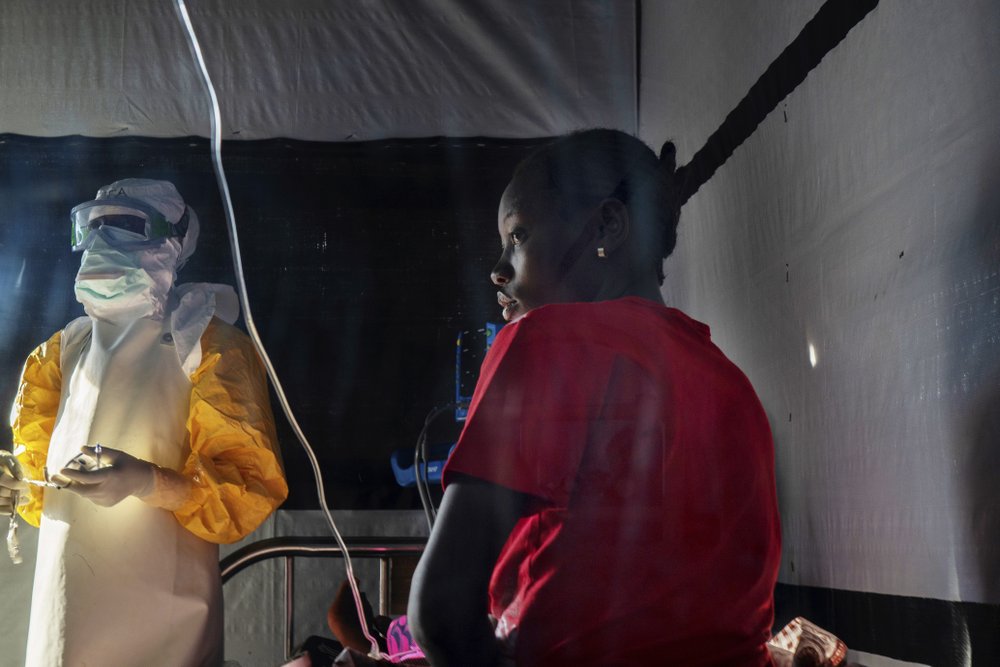 In this Saturday, July 13, 2019 photo, health workers dressed in protective gear check on Ivette Adania, 24, a mother of four whose husband died of Ebola, at a treatment center in Beni, Congo. (Photo: AP)

Until his last breath, Salomon Nduhi Kambale insisted he had been poisoned by someone and that was the reason he was vomiting blood. The 30-year-old man wouldn’t give community health teams his phone number, and when they found it, he hung up on them.

Health workers were desperate to persuade him to get vaccinated for Ebola after a friend fell ill with the lethal and highly contagious disease.

But within days, Nduhi was dead. His widow and their four young children were given his positive Ebola test result and a chilling warning from a team of health workers: “If you don’t accept vaccination, you can prepare to die.”

Deep distrust — along with political instability and deadly violence — has severely undermined efforts by public health authorities in Congo to curb the outbreak by tracing and vaccinating those who may have come into contact with infected people.

Health experts agree the experimental Ebola vaccine has saved multitudes in Congo. But after nearly a year and some 171,000 doses given, the epidemic shows few signs of waning. The virus has killed more than 1,700 people and has now arrived in the region’s largest city, Goma. The World Health Organization last week declared the outbreak a global health emergency.

During the 2014-16 Ebola epidemic in West Africa, which left more than 11,300 people dead, health workers could only dream of a vaccine with a 97.5 percent effectiveness rate that could improve the odds of survival even in those already infected.

“We have it now and it’s not the miracle we wanted it to be,” said Dr. Joanne Liu, president of Doctors Without Borders. “The fact that we’ve used so much vaccine, and the epidemic hasn’t stopped, that shows us that contact tracing is not great.”

WHO says as many as 90 percent of those eligible for vaccination have accepted it, but that figure only includes those who gave contact tracers enough information to be included on a list. The success rate excludes those who distrusted health workers and fled, or those who couldn’t be found in the first place.

Because of the difficulties in making that strategy work, some people didn’t get vaccinated until they had already been infected with the virus, and they developed Ebola anyway. That increased doubts about the vaccine in communities where the public health campaigns led by outsiders already were viewed with suspicion and hostility.

“The rumors were if you got vaccinated you would die,” said Liboke Kakule Muhingi, a 43-year-old farmer in Mangina, where the epidemic began last August.

His mother was among the first to die. Then, one by one, six of his sisters who had cared for their ailing mother were killed by Ebola. Kakule accepted the vaccine and made sure his wife and eight children got it, too.

In some cases, health teams have been unable to reach certain areas because of violence or rebel activity. Earlier this month, the head of the Congolese health ministry’s response efforts in Beni was at one point unable to return from a field visit while the military battled ADF rebels, who are linked to the Islamic State.

More often, though, contact lists have fallen apart simply because people have deliberately evaded health workers or did not understand they shouldn’t travel after being exposed. A pastor who became the first confirmed case in Goma had apparently put down fake names at health checkpoints to avoid detection. He had been sickened in the town of Butembo and then took a bus while ill.

WHO and the Congolese health ministry have now switched tactics and are offering the vaccine to anyone who wants it.

With Ebola’s arrival in Goma, a city of more than 2 million people, some wonder whether there will be enough of the vaccine if the outbreak continues.

The vaccine’s manufacturer, Merck, said it has 245,000 1-millileter doses on hand and that could rise to 900,000 over the next 18 months. The dose in Congo also has been reduced to 0.5 mL, effectively doubling the supply.

“Whether or not the available doses are sufficient to fulfill the demands depends on the evolution of the outbreak, the access to the communities and the successful expansion of the production of additional doses by Merck in early 2020,” WHO said.

There is a second experimental vaccine, produced by Johnson & Johnson, but health officials in Congo have said it will not be used because it needs further testing and would cause too much confusion. It requires two doses given one month apart.

It’s unclear how long the Merck vaccine will protect people. Scientists know from early studies that it lasts for at least a year, but the epidemic is approaching that limit. The only study to report longer vaccine durability tracked only a small number of healthy volunteers in Geneva for two years.

The new strategy of giving shots to anyone who wants them involves setting up “pop-up” sites in the neighborhoods most affected. Last week a vaccination team headed to the neighborhood in Beni where Nduhi’s wife had stayed after he died.

Outside the mud-brick home where his children still lived, a pickup truck full of plastic tables and chairs pulled over. Soon a tent was set up, and vaccination teams donned eye protection and yellow surgical gowns. Neighborhood children climbed the trees to watch.

Baraka Kathembo Makasi, a 22-year-old motorbike taxi driver, brought his wife and two children with him.

“At first I refused,” he said, “but I started seeing people die and decided to go.”