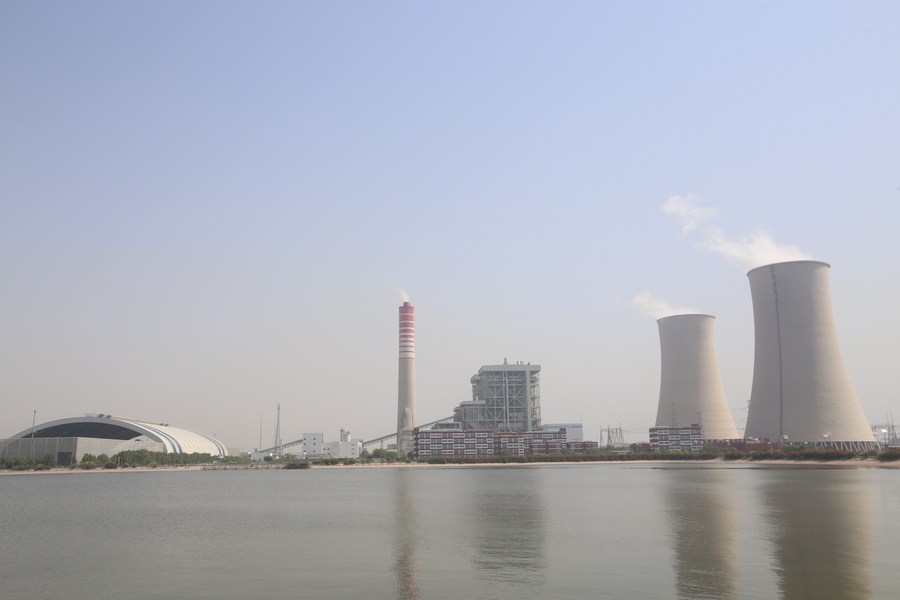 Sahiwal power plant is seen from the distance in Punjab Province, Pakistan, May 28, 2021. (Photo: Xinhua/Tang Binhui)

ISLAMABAD, June 3 (Xinhua) -- Sahiwal Power Plant in Pakistan's eastern province Punjab, a major energy project under the China-Pakistan Economic Corridor (CPEC), has been addressing the country's energy woes over the years besides meeting all local and international environment protection standards.

Sprawling over hundreds of acres of land, the power plant has clusters of flowers blooming along its driveways, lush green grass and fruit-bearing mango and guava trees which not only give an enchanting view to the onlookers but also highlight its eco-friendly nature.

The plant's well-planned lakes glisten in the sunset with a group of ducks swimming in the water.

As the World Environment Day falls on June 5, the power plant reminds that electricity generating systems across the country and the world should follow the concept of green development.

"It has adopted a series of strict environmental protection measures to minimize the degree of environmental pollution from waste gas, wastewater, particulate matter and noise, which has enabled the plant to keep emissions well below the national standards in Pakistan and those of the World Bank."

Talking about energy efficiency, Nouman Ali, a mechanical engineer at the power plant, said the coal-fired power plant was the first in the country to introduce supercritical technology to generate clean electricity. Thanks to the latest technology, the plant produces more electricity with less coal consumption, enabling it to protect the environment.

It has a system to control various emissions from the plant. Low NOx burners are used for nitrogen oxide (NOx) emission control, whereas sulfur dioxide emission is reduced by a flue-gas desulfurization system, Ali said.

"So because of all these technologies, Sahiwal does not look like a typical coal power plant. It is very clean," Ali said, adding that "before joining the power plant, my perspective was certainly that the coal power plants will be full of dust. And maybe the environment will not be very clean. But I will say that my belief was changed when I came here."

The Sahiwal plant adheres to the classification processing of wastewater and multi-use of different kinds of water. For example, domestic sewage is used to irrigate fruit trees, Xu said, adding that after sewage treatment the indicators will meet all the requirements of environmental standards. "We have been trying to reduce and recycle sewage as much as possible," he said.

"The Pakistani government launched the 'Ten Billion Tree Tsunami Programme' in 2018, which coincides with the environmental protection concept of our power plant. Taking this opportunity, we have continuously expanded the scale of tree planting and the green area of the plant to improve the ecological environment," Xu said, adding that more than 80,000 trees of over 100 varieties have been planted in the whole area, and 152,000 square meters of turf have been laid.

"This power plant is great. It is also famous for its agricultural production. We do have guava and oranges and also mangoes. You must have seen mangoes and oranges. Yes, we have such trees in our power plant," said Ali.

"And I remembered last year when it was the season of guava, all the fruits which were provided in our canteen was from our own trees. We do enjoy that."

The efforts made by the power plant in environmental conservation provide employees beautiful and comfortable working and living environment.

Farhan Mehboob, an electrical engineer of the plant, told Xinhua that during the construction, the plant was different from what it is now, and soils and machinery could be seen everywhere. The situation gradually improved after the end of the commissioning period.

"We saw so many trees and so many beautiful places. So it would not be wrong if I say that this is a mighty garden," he said.

Environmental protection measures of the plant have also been highly appraised by the local government. The plant has received the 13th Corporate Social Responsibility Awards and won the 16th and 17th Annual Environment Excellence prizes by the National Forum for Environment & Health of Pakistan.

The 1,320-megawatt coal-fired power plant has so far generated 32.2 billion kWh of electricity, significantly lessening power shortage in the country.

"We want to build Sahiwal Power Plant as our home, and we will certainly continue to do greening and environmental protection to make it a real 'melon and fruit garden'," Xu said.