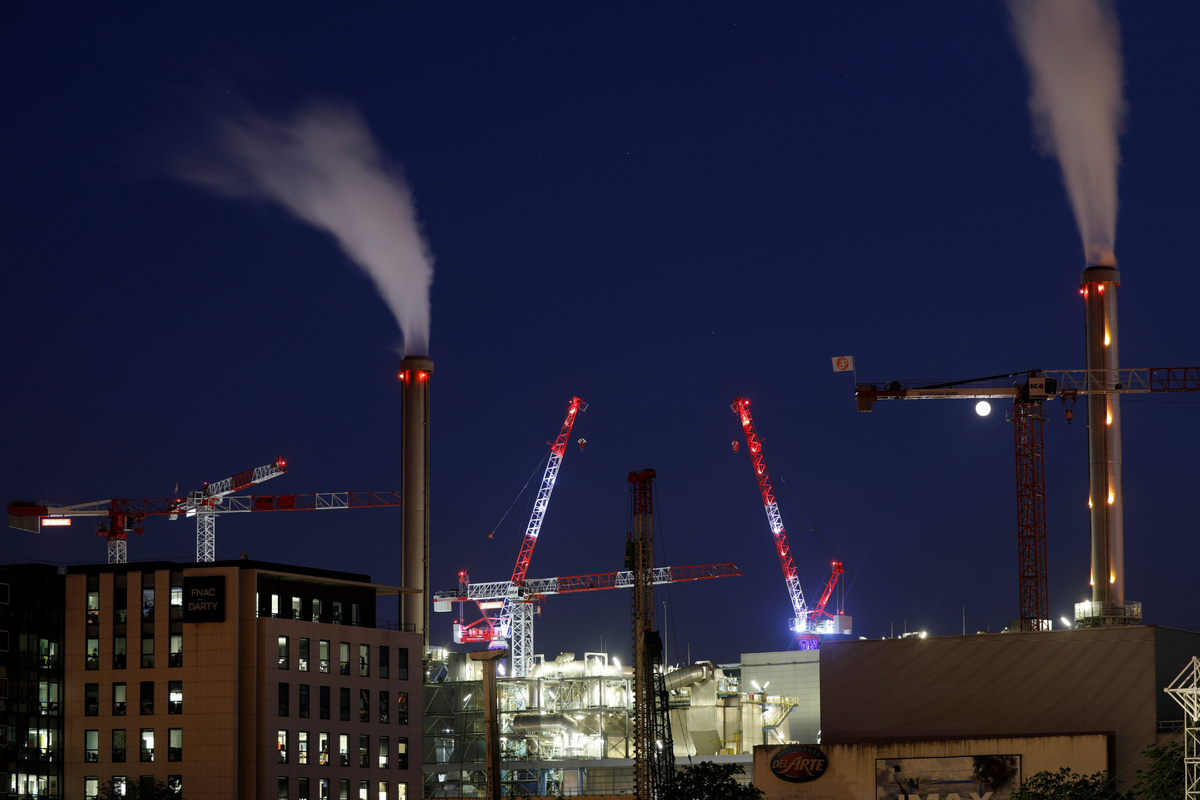 Cranes are seen at a closed construction site of extension buildings on the banks of the Seine River in Paris, during a lockdown imposed to slow the spread of the coronavirus disease (COVID-19) in Paris, France April 8, 2020. (Photo: Agencies)

BRUSSELS - The coronavirus pandemic, which had claimed over 60,000 lives and infected more than 700,000 people in Europe as of Wednesday, has begun to spread economic gloom in the continent.

Over the past days, noted economic think tanks, central banks and government officials in Europe had issued gloomy economic outlooks for major European economies, such as Germany, France, Italy and Britain.

On Wednesday, Germany's leading economic institutes forecast that the economic output of Germany, Europe's main engine of growth, was likely to shrink by 4.2 percent in 2020 due to the impact of the coronavirus.

According to the forecast, Germany's gross domestic product (GDP) was likely to shrink by 1.9 percent in the first quarter and would fall by 9.8 percent in the second quarter.

The institutes predicted that as a result of the pandemic, the country's unemployment rate would rise to 5.9 percent "at its peak" in 2020.

Germany would also end up with a "record deficit" of 159 billion euros (172.8 billion US dollars) this year, compared with a positive balance of 45.3 billion euros in 2019.

In neighboring France, the central bank BdF said that the country's economy shrank by 6 percent in the first quarter of the year, its worst performance since 1945, due to slack industrial, service activities and turbulent financial market caused by the pandemic.

The bank had previously estimated growth of 0.1 percent for the January-March period of this year.

The French government had instituted two-week confinement on March 17 to contain the outbreak. The lockdown was prolonged by 15 days until April 15, and would likely be extended. Every two-week confinement would lead to a 1.5 percent loss in GDP, said the central bank.

A report by the bank, based on the interviews of 8,500 business leaders from March 27 to April 3, showed that French economic activity dropped by 32 percent because of the coronavirus lockdown.

In Britain, a report published Monday by the Center for Business and Economic Research, a think tank, said the country's economic output would reduce by 31 percent due to the current level of lockdown to fight COVID-19.

Morgan Stanley forecast last month that the British economy will contract by 5 percent this year, in sharp contrast to the most recent official growth forecast of 1.1 percent from the Office for Budget Responsibility.

As some European countries reportedly attempt to relax lockdown measures as early as mid-April, the World Health Organization (WHO) regional office for Europe on Wednesday described the continuing fight against COVID-19 in European regions as a "marathon", stressing that it is not time to lower guard and relax measures.

In a video statement to the press in Copenhagen, WHO Regional Director for Europe Dr. Hans Kluge called on all Europeans to stay united and vigilant.

"Knowledge of COVID-19 and some positive signs from some countries do not yet represent victory ... Now is not the time to relax measures. It is the time to once again double and triple our collective efforts to drive towards suppression with the whole support of society," Kluge said, warning that "Europe remains very much at the center of the pandemic."

His warning was echoed by Dr. Ranieri Guerra, who sits on the Technical and Scientific Committee advising the Italian government on how to handle the pandemic.

"We still have to take a lot of preliminary steps," Guerra said Wednesday at a press conference in Rome.

"The trend of the epidemic curve shows it is not decreasing significantly, but rather we are in the midst of a slowdown in the speed of transmission (of the virus)," said Guerra, who also serves as assistant director-general for strategic initiatives at the World Health Organization (WHO).

"This means there is a reservoir of asymptomatic coronavirus carriers, which continues to guarantee the circulation of the virus," said Guerra.

Relaxing the lockdown "in these conditions, without precise knowledge of how the coronavirus epidemic has evolved and will evolve, is rather difficult to imagine," he said.

Also on Wednesday, Spanish Health Minister Salvador Illa said that Spain, which recorded the most infection cases in Europe, has "reached the peak of contagion," although the country saw a rise in new COVID-19 cases and deaths for a second day after four straight days of decline.

In the Netherlands, the total number of COVID-19 cases has surpassed the 20,000 mark on Wednesday, according to fresh figures from health authorities.