NAIROBI, June 17 (Xinhua) -- Peter Kariuki, a 23-year-old Kenyan university student majoring in science and telecommunications technology, has ambitions to be on the frontlines of the country's fourth industrial revolution. 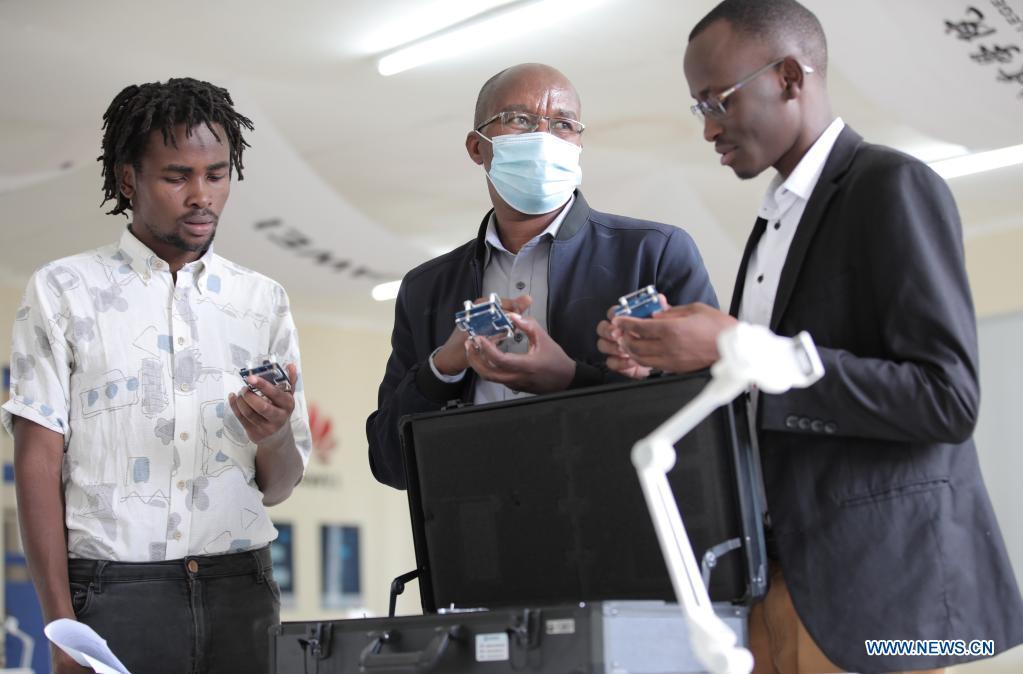 Charles Mwaniki (C), dean of the school of engineering and technology at Machakos University, demonstrates how to set up WiFi and bluetooth networks to students Peter Kariuki (R) and Owen Alikula (L) at the institution's Luban workshop in Machakos, Kenya, May 19, 2021. (Photo by James Asande/Xinhua)

Kariuki is enrolled at Machakos University, about 65 km southeast of the Kenyan capital of Nairobi, where a Luban Workshop launched in 2019 has raised the bar in vocational training.

A Luban Workshop provides technical and vocational training across a variety of fields to boost practical skills.

Though the COVID-19 pandemic has affected learning institutions worldwide, China has been working with African countries to establish more workshops.

The workshop held a five-day training on cloud computing back in January. Nineteen trainees from Kenyan universities, including those from Machakos University, took part.

Kariuki said the training was a game changer in his quest to refine his technical skills and has paved the way for a promising career in the industry.

"I have been taking a Huawei Certified ICT Associate (HCIA) routing and switching hardware (course) at Luban workshop for the last four months and have been able to gain hands-on skills on HCIA, R&S, AI Routing and Switching," Kariuki told Xinhua in a recent interview.

He said joining the program named after Lu Ban, an ancient Chinese woodcraft master, has improved his grasp of state-of-the-art networking technologies and their real-life applications, since the knowledge he learned in school has not adequately prepared him for a demanding career in network engineering.

"In HCIA routing and switching here at the Luban workshop, you get to learn a lot of skills, hands on skills unlike in class where we do a lot of theories," said Kariuki.

Kariuki said he is confident of establishing small- to medium-sized networking platforms in the near future with the skills acquired at the workshop.

Charles Mwaniki, dean of the school of engineering and technology at the institution, told Xinhua that training has enabled learners to have greater space to hone their technical skills.

"By introducing the Luban Workshop, the training has been more practical than before. We have more resources for students," said Mwaniki.

Philip Muchiri, head of the department of computing and information technology at the university, said his department has trained about 20 academic staff to teach students at the workshop.

"By the end of this year, we will have the first group of students graduating," said Mwaniki.

Owen Alikula, a 23-year-old university student majoring in information technology, said he never had the opportunity to interact with data centres until he joined Luban.

"It is a place that transforms young minds," Alikula said, adding that "Luban Workshop is the best additional learning source."

Kenya is among a growing number of African countries where the launch of a Luban Workshop lines up with China's plans to boost capacity building including vocational training on the African continent.

The launch of the learning program in Nigeria's Abuja University in November 2020 was hailed as critical in meeting the rising demand for high-end technical skills in Africa's largest economy.

"This laudable initiative by the Chinese government is commendable due to the technical and professional training for the good and development of our nation," said Adamu.

China announced in September 2018 that 10 Luban Workshops would be established in Africa to provide vocational training for the continent's youth under the framework of the Forum on China-Africa Cooperation.

Abdulrasheed Na'Allah, vice chancellor of the University of Abuja, said the program -- established with support from the Tianjin Sino-German University of Applied Sciences and Tianjin Railway Vocation and Technical College -- will enable Nigerians to acquire marketing skills.

The April launch of the Luban Workshop at Ethiopian Technical University (ETU) based in the capital of Addis Ababa will pave the way for training in industrial sensor technology, mechatronics and robotics.

"It will make our graduates familiar with the 21st century skills and knowledge," said Teshale Berecha, president of ETU, adding that the facility will accommodate about 150 students and has the capacity to offer training to batches of students every year.

Habtamu Sisay, a student pursuing a post-graduate degree in automotive engineering at ETU, said studying at Luban will fulfill his dream of advancing mechatronics and robotics technologies in his country.

According to Sisay, the absence of well-equipped facilities hindered his quest for knowledge on emerging technologies like Artificial Intelligence that could fuel Ethiopia's industrial transformation.

He said a visit to the workshop made him appreciate the practical learning experience.

"With the Luban Workshop, we will be able to directly engage in practical classes with the help of modern machinery," said Sisay.

A workshop in eastern Uganda was launched in December 2020.

Elioda Tumwesigye, Uganda's former science and technology minister, praised China for establishing such a workshop that trains local youth on the application of modern technology in order to secure better jobs.

"After this particular training, and when students graduate, we are very sure that they are going to secure good jobs," Muchiri said, "because the demand is very high for cloud computing engineers."