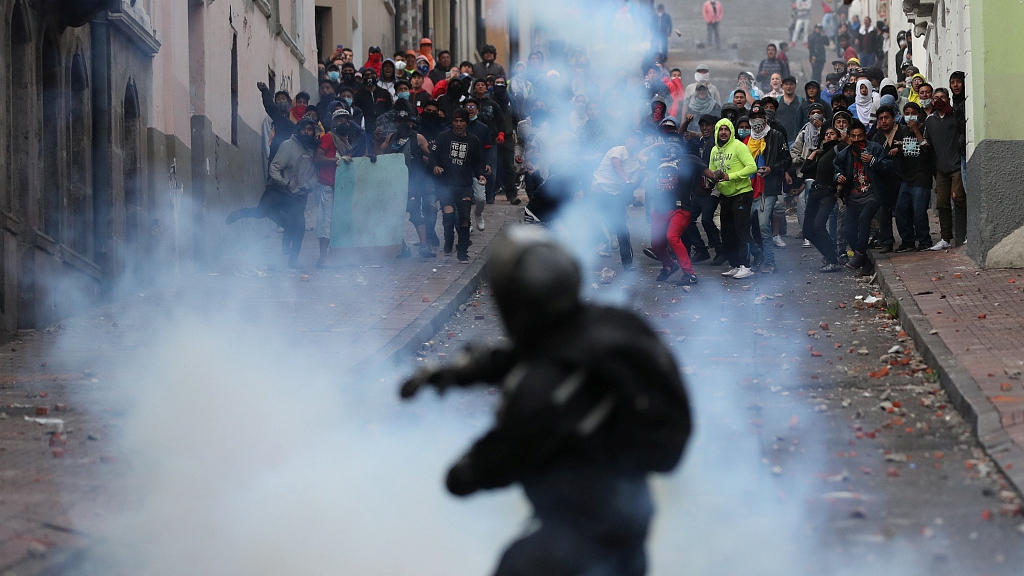 Ecuador's President Lenin Moreno on Tuesday ordered a curfew around government buildings as angry protests over soaring fuel prices continued for a sixth day and demonstrators stormed the National Assembly.

Moreno has declared a state of emergency and the government has moved out of Quito amid increasing protests and repeated clashes with security forces.

On Tuesday, some demonstrators burst through security cordons to briefly enter the National Assembly, waving flags, pumping their fists and chanting: "We are the people!" before being evicted by security forces.

Elsewhere in Quito and other flashpoints, masked and stick-wielding protesters again hurled stones and battled with security forces, who responded with tear gas.

Protests erupted last Thursday when the government cut fuel subsidies as part of a package of economic reforms, in keeping with a 4.2-billion-U.S.-dollar International Monetary Fund (IMF) loan. Fuel prices rose by up to 120 percent.

Indigenous groups and others have been barricading roads with burning tires, rocks and branches, while police have deployed armored vehicles and water cannon.

The protests have left one civilian dead and 77 people injured, the majority of them security forces, according to the government.

Thousands of demonstrators have converged on Quito ahead of a planned demonstration on Wednesday with transport and student unions.

Moreno on Tuesday tried to head off the planned protest by offering to hold talks with "the indigenous brothers." He added that income from the elimination of fuel subsidies would be spent "on the poorest."

The government also called on the United Nations and Catholic Church to help mediate with protesters. "The only response is dialogue and firmness at the same time," said presidential secretary Juan Roldan.

The week-long protests have slashed the South American country's oil output by a third. Oil production fell 31 percent after the seizure of three oil facilities in the Amazon, the energy ministry said Tuesday.

Nearly 600 people have been arrested, authorities say, including a legislator who supports Moreno's predecessor Rafael Correa.

Moreno has accused the leftist Correa, his one-time mentor and boss when he was vice president, of seeking a coup with the help of Venezuela's President Nicolas Maduro.