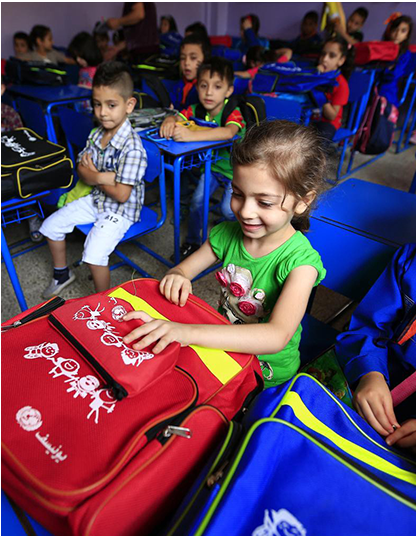 "This generous contribution for education in emergencies by the United Kingdom's Department for International Development (DFID) to Education Cannot Wait is the largest, single contribution received thus far and will have a massive, positive impact," ECW Director Yasmine Sherif said in a press release emailed to Xinhua.

The announcement was made by British Prime Minister Boris Johnson, who is attending the 45th G7 summit being held on Aug. 24-26 in Biarritz, France.

"It will benefit 600,000 children and youth, especially girls, whose education is disrupted and leaves them furthest behind due to armed conflicts, natural disasters and other emergencies around the world," said Sherif.

"We are deeply grateful to the prime minister, DFID and all the people of the United Kingdom for their generosity and confidence in the progress being made to rapidly and efficiently invest in quality education in some of the world's most dangerous and unstable situations," Sherif added.

This "significant" contribution will accelerate access to education for girls as a priority, as well as for children with disabilities, children from minority groups, and refugee and displaced children, the press release said.

"It also makes good on global commitments as it will accelerate progress towards Sustainable Development Goal 4: to ensure inclusive and equitable quality education," she added.

The British government is a founding member of ECW. With this new unprecedented pledge, Britain becomes ECW's biggest donor, with a total contribution now amounting to 154 million U.S. dollars to the global fund.

ECW and its partners have already reached nearly 1.5 million children and youth in crises with quality education opportunities, and plan to launch multi-year educational responses in 25 priority countries by 2021. It is the first global multi-lateral fund dedicated to education for children and youth in war zones, natural disasters and crises.

Civil society organizations around the world have joined ECW in appealing to the international community to urgently mobilize 1.8 billion U.S. dollars in funding for education in emergencies by 2021 to support 9 million children annually, said the press release.

ECW, hosted by the United Nations Children's Fund (UNICEF), is the first global fund dedicated to education in emergencies. It was launched by international humanitarian and development aid actors, along with public and private donors, to address the urgent education needs of 75 million children and youth in conflict and crisis settings.

UNICEF Executive Director Henrietta Fore has voiced her "sincere hope" that the protection and well-being of children in Syria will be the "front and center" during the talks held by world leaders at the G7 summit.