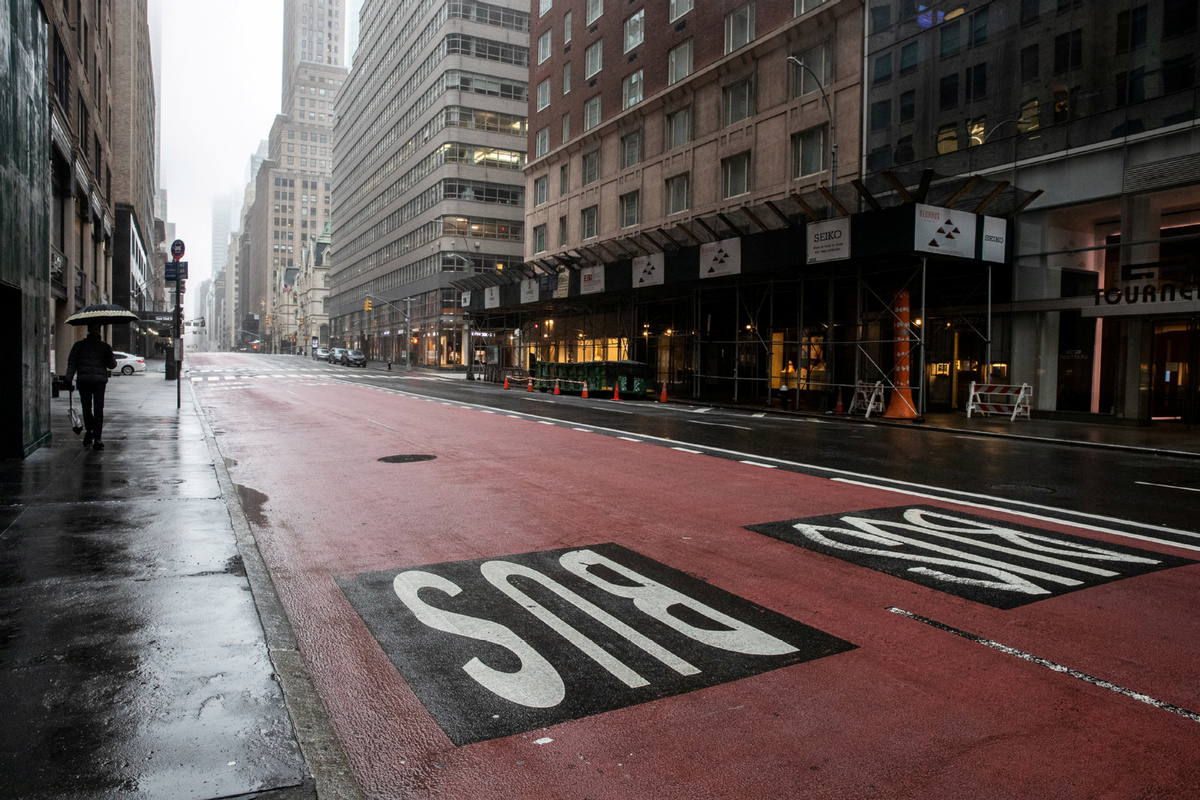 An empty Madison Avenue is seen during the outbreak of the coronavirus disease (COVID-19) in New York City, US, March 29, 2020. (Photo: Agencies)

"No business," he said. Adaam shrugged and glanced at an empty street. The spread of the novel coronavirus has forced millions of New Yorkers to stay home, upending daily life and crushing commerce.

Adaam said his wife urged him to stop driving and remain inside, but the 56-year-old driver from Queens said he must make money to pay the rent and support his family.

That's increasingly difficult. On a good day before the coronavirus outbreak, Adaam said he picked up 10 or 12 fares.

Now, he's lucky to get two or three customers－and if people are still going to John F. Kennedy Airport, he hasn't seen them.

Empty streets, subway trains, shuttered restaurants, dark Broadway theaters, and nearly empty office buildings have turned Manhattan into what could serve as the set for a post-apocalypse movie.

Times Square, billed as Crossroads of the World, is as silent as the prairie in Kansas.

There are no tourists gleefully snapping pictures in front of the building on West 42nd Street where the ball drops each year to mark the new year or office workers hurrying to nearby high-rises.

The reduced ridership takes a huge bite out of the revenue needed to operate the system. That has forced the MTA to eliminate services on three lines and, like other transit agencies around the country, seek federal aid.

"MTA needs significantly more than $4 billion to survive this crisis," MTA Chairman Patrick Foye said before the US Congress passing a $2 trillion relief package on Friday. It allocates $3.8 billion to the agency.

On Sunday, the MTA announced that Foye, 63, had tested positive. He learned of his positive test on Saturday and is "feeling good" and isolating at home.

The MTA said it disinfects all 6,700 subway cars and 5,700 buses in its fleet every 72 hours. Token booth clerks no longer handle cash transactions, and Metro Card vending machines are scrubbed daily, said Meredith Daniels, spokeswoman for the MTA.

The agency is also disinfecting Long Island Railroad and Metro North trains that bring suburban commuters into Manhattan. The agency said it expects to spend at least $300 million on the project and will continue the cleanings as long as needed.

Alana Morales, spokeswoman for the city's Transportation Department, said ridership on the Staten Island Ferry is down 85 percent from a year ago.

The ferry, which carries commuters from the city's outermost borough to Lower Manhattan and gives tourists a close-up view of the Statue of Liberty, carried 67,030 passengers on March 27, 2019, but patronage fell to 9,549 on March 25, she said.

The city announced plans to close portions of major thoroughfares to vehicular traffic from 10 am to 7 pm, Monday to Friday, to give people more space to walk and make social distancing easier.

In Manhattan, Park Avenue will be closed between East 28th and 34th streets. If successful, the pilot program could be expanded.

Sandy, a massive hurricane that flooded Lower Manhattan in 2012, and the September 11, 2001, terrorist attacks on the World Trade Center, affected limited areas of the city. The impact of the coronavirus is citywide.