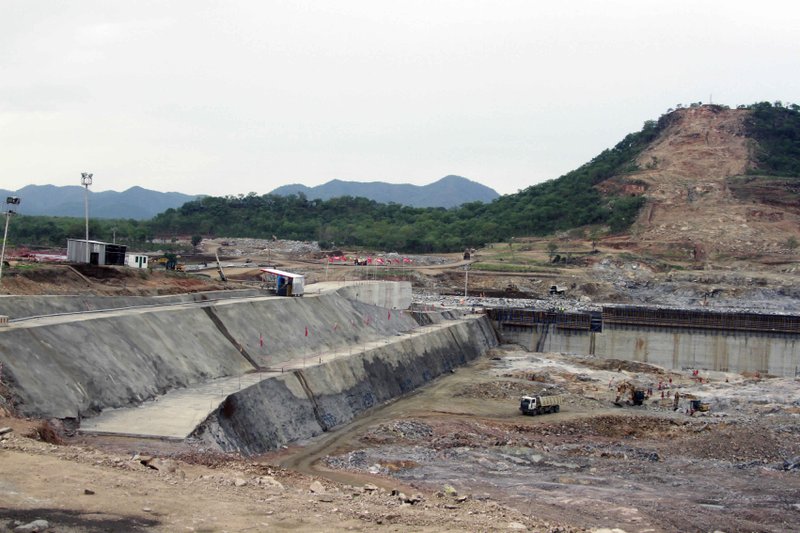 In this June 28, 2013 file photo, construction work takes place, at the site of the Grand Ethiopian Renaissance Dam near Assosa, Ethiopia. (Photo: AP)

CAIRO, Oct. 22 (Xinhua) -- Egypt said Tuesday it was shocked and "follows up with great concern" the reported statement by Ethiopian Prime Minister Abiy Ahmed that hinted at military option in resolving the dispute over a Nile dam.

In a statement, Egyptian Foreign Ministry said "it was not appropriate" for Ahmed to involve the military option among other choices to solve the dispute with Egypt on Ethiopia's building of the Grand Ethiopian Renaissance Dam (GERD) on the Nile river.

The Ethiopian leader was quoted by press reports as saying on Tuesday that "Some say things about use of force (by Egypt). It should be underlined that no force could stop Ethiopia from building a dam."

"If there is a need to go to war, we could get millions readied. If some could fire a missile, others could use bombs. But that's not in the best interest of all of us," he added.

The Egyptian Foreign Ministry said that Egypt has always advocated negotiations as a way to settle disputes related to the GERD among the three countries, namely Egypt, Ethiopia and Sudan.

The statement revealed that Egypt had received an invitation from the U.S. for a meeting of the foreign ministers of the three countries in Washington to discuss the dam dispute.

The last round of talks on the GERD held by Egypt, Sudan and Ethiopia in the Sudanese capital Khartoum on Oct. 5 failed to reach a solution, with Egypt blaming Ethiopia for "rejecting all proposals that would help Egypt avoid serious harms caused by the construction of the dam."

Egypt, a downstream Nile Basin country that relies on the Nile for its fresh water, is concerned that the construction of the GERD might affect its 55.5-billion-cubic-meter annual share of the river water.

Ethiopia started building the dam in 2011, which is expected to produce more than 6,000 megawatts of electricity and become the largest hydropower dam in Africa upon completion.

On Oct. 13, Egyptian President Abdel-Fattah al-Sisi said he will meet Ahmed in Russia to discuss the issue.

Sisi and Ahmed highlighted during a phone conversation on Oct. 11 the importance of overcoming all obstacles facing the tripartite negotiations over the GERD.

The two leaders also agreed that an agreement should be reached that fulfills the hopes and aspirations of the peoples of Egypt, Sudan and Ethiopia within the framework of the Declaration of Principles signed by the three countries in 2015.