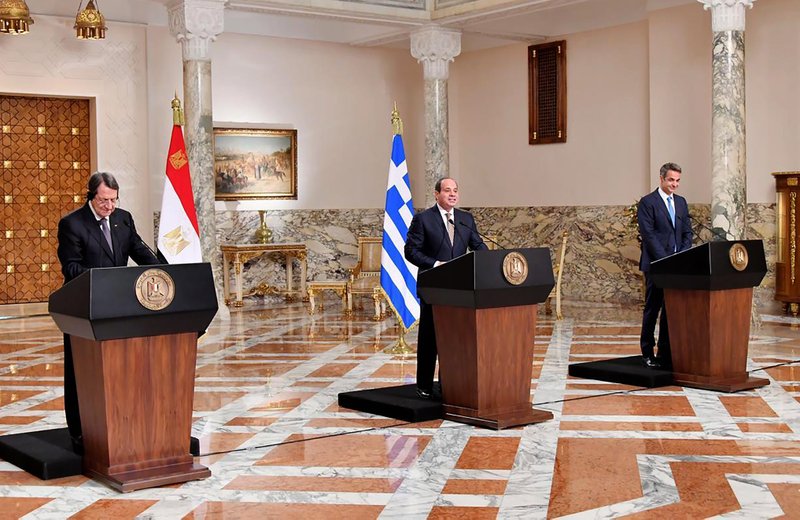 CAIRO, Oct. 8 (Xinhua) -- The leaders of Egypt, Cyprus and Greece on Tuesday condemned Turkey for its "unilateral" and "provocative" measures to conduct offshore drilling in disputed waters in Eastern Mediterranean.

At a press conference following a tripartite summit in Cairo, Cypriot President Nicos Anastasiades criticized Ankara's "unilateral" and "unacceptable" acts and "blatant infringement" on his country's sovereign rights and international laws by drilling in areas claimed by Nicosia.

He vowed to take all available diplomatic measures to stop Turkey's violations, which he said are "jeopardizing" the stability and security in the region.

For his part, Egyptian President Abdel-Fattah al-Sisi condemned the "unilateral practices that would destabilize the entire region and harm the interests of its countries," without mentioning Turkey by name.

Turkey has always claimed its rights to exploring hydrocarbon resources off Cyprus in Eastern Mediterranean despite its disputes with Cyprus.

In previous months, Turkey dispatched several drilling and exploration ships into the waters around Cyprus, searching for gas reserves in the areas also claimed by Cyprus.

The drilling ships have been escorted by a growing flotilla of Turkish naval vessels, submarines, drones and patrol aircraft.

The discovery of rich gas reserves in Eastern Mediterranean in the last decade has triggered a race to tap the region's underwater resources and sparked tensions between Turkey with both Cyprus and Greece.