CAIRO, May 30 (Xinhua) -- Egyptian Foreign Minister Sameh Shoukry met on Sunday with his visiting Israeli counterpart Gabi Ashkenazi to discuss solidifying the recent truce in the Gaza Strip and ways to revive the Israeli-Palestinian peace process. 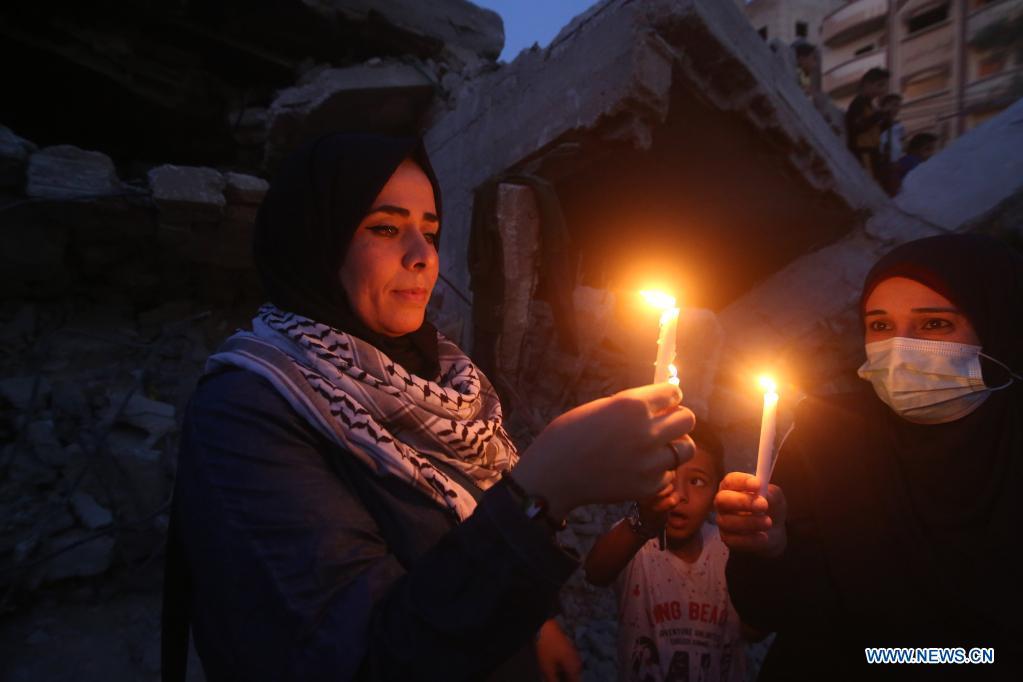 Palestinians hold candles near buildings destroyed in Israeli air strikes in the southern Gaza Strip city of Rafah, on May 25, 2021. Limited international relief cargo, COVID-19 vaccines and aid workers are allowed into Gaza while the United Nations calls on Israel to open all crossings, UN humanitarians said on Tuesday. (Photo: Khaled Omar/Xinhua)

The two ministers agreed to continue consultations between the two countries and the Palestinian Authority "to explore ways out of the current stalemate in the peace track," the Egyptian Foreign Ministry said in a statement.

The talks also addressed the necessary measures to facilitate the reconstruction of Gaza Strip following the recent Israeli bombings that caused massive damages to the Gaza infrastructure. Egypt has allocated 500 million U.S. dollars for the reconstruction.

Ashkenazi's visit to Egypt came 10 days after the Egypt-brokered ceasefire that ended the 11-day Israel-Hamas fighting, which left at least 248 Palestinians and 12 Israelis dead.

During the meeting, Shoukry called for taking further measures during the current truce to reinforce calm and provide the necessary conditions for "creating an atmosphere conducive to reviving the desired political path."

The Egyptian top diplomat also reiterated Egypt's fixed position in support of the establishment of an independent Palestinian state with East Jerusalem as its capital based on the 1967 borders.

He also referred to the two-state solution as "the only way to achieve just and lasting peace, as well as the desired regional security and stability," emphasizing the Palestinian people's right to self-determination.

Ashkenazi's trip to Cairo coincided with Egypt's sending of a high-profile security delegation to Israel and Palestine to discuss related issues and the Israeli-Palestinian truce.

The security delegation will discuss ways to reach a comprehensive truce in the West Bank and Gaza Strip, according to Egypt's official MENA news agency.