An opulent presidential palace, a brand new parliament, a regal opera house and spacious parks are all part of the vision for an ambitious new administrative capital rising up out of the Egyptian desert.

As far as the eye can see, building sites dot the horizon heralding the arrival of this crown jewel of President Abdel Fattah al-Sisi's grand urban plans.

About 50 kilometres (30 miles) east of the north African country's 1,000-year-old capital, Cairo, construction workers are racing to finish the project. 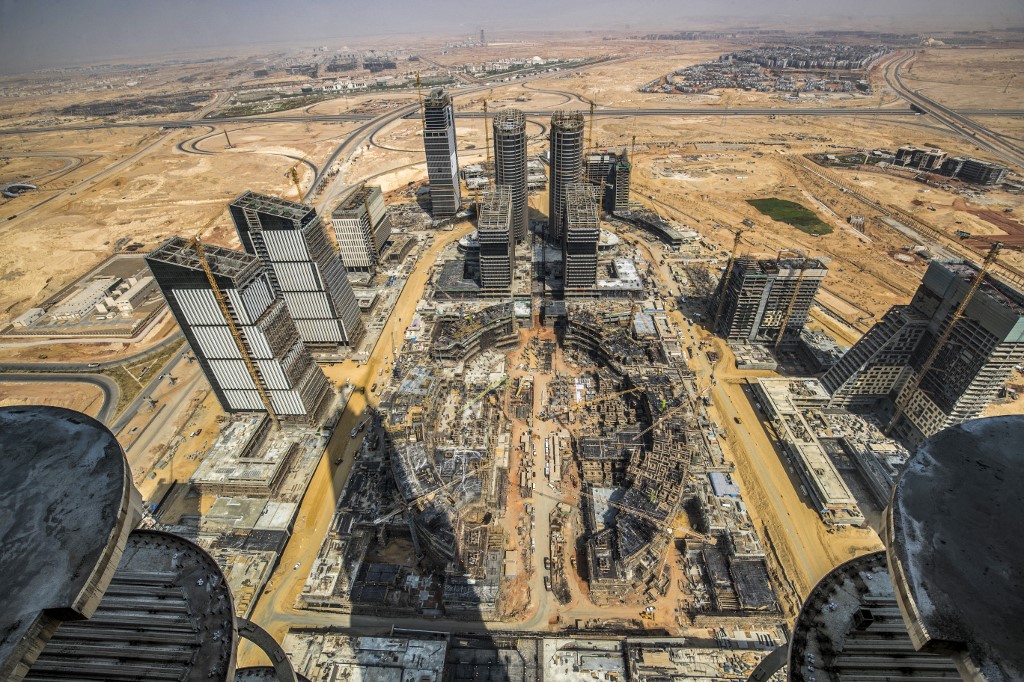 In this file photo taken on August 3, 2021 from the "Iconic Tower" skyscraper shows a view of construction work ongoing at the "business and finance district" of Egypt's "New Administrative Capital" megaproject, some 45 kilometres east of Cairo. (File photo: AFP)

It had been set to be unveiled on June 30 -- the date marking the anniversary of 2013 mass protests, backed by the military, which toppled the divisive rule of late Islamist president Mohamed Morsi.

But the launch was postponed because of the Covid pandemic that led to a downturn in the market.

After a series of false starts, Sisi this month issued a directive for civil servants to relocate to the new capital in December for a "six-month trial period".

The city is forecast to cost around $45 billion, is roughly the size of Singapore, and has been touted as a solution to overpopulation in the sprawling metropolis of Cairo, home to more than 20 million people.

After being first elected in 2014, Sisi anointed the new capital as "the birth of a new state ... and republic".

Some believe, however, the new city, just known officially as the New Administrative capital, will not compete with Cairo in the same way as Brazil's new capital Brasilia and even risks eventually being swallowed up by its huge neighbour.

"The new capital for me is a mystery," said Galila El-Kadi, an urban planning professor and director of the Marseille-based Research Institute for Development.

"It's already on the edge of Cairo without anyone moving there yet and within a few years it will expand and fuse into Cairo. This will only increase problems of managing human density of such magnitude," she told AFP.

Sisi has staked his legacy on massive infrastructure projects, and ground has also been broken in other new cities including on the Mediterranean Sea at El Alamein, in the fertile Delta near Mansoura and in the south near Aswan.

In 2019 Sisi inaugurated a massive mosque in the new capital with capacity for 3,000 worshippers, as well as the largest cathedral in the Middle East for the Copt population, seeking to enhance his image as the country's self-proclaimed unifier.

And the capital remains "the biggest project among all other projects undertaken by the state", Khaled al-Husseini, the spokesperson for the main construction firm building the capital, told AFP.

The first phase "will span 250 kilometres squared and can accommodate up to two million citizens".

Real estate firms are advertising new units with mortgage payments divided over more than 10 years -- a rarity in a country where payments are upfront.

Husseini boasted the new "smart city" will provide a better lifestyle, with state of the art hospitals, schools and universities.

Around 50,000 civil servants are expected to move in, with the number doubling in the next three years.

Affordable housing units in nearby satellite settlements aimed at state employees have been built by the government.

And a $4.5 billion monorail project will connect Greater Cairo and the new capital, with two trains already delivered by French firm Alstom.

But the staggering construction costs have triggered criticism about Egypt's spending priorities, with one in three of the 102 million people living below the poverty line.

Most people won't be able to afford apartments and villas in the new city, said Mustapha Kamel al-Sayyed, a political science professor at Cairo University.

"The (government's) vision of what is dubbed modernity is just a transfer of the manifestations of Western modernity to Egypt," he said.

"It means having skyscrapers, wide roads and advanced technology," he added.

"But modernity in reality is about a government being accountable to its people" such as providing a good education, he explained.

Kadi added that since the time of the pharaohs "administrative capitals were established for the purpose of isolating the ruler from the people".

Residents of several settlements and low-income areas have already been evicted or moved to government housing -- sometimes in remote areas -- as part of the urban development plans.

"Sisi wants history to remember him by moving the centre of power from Cairo to a place that will immortalise him."