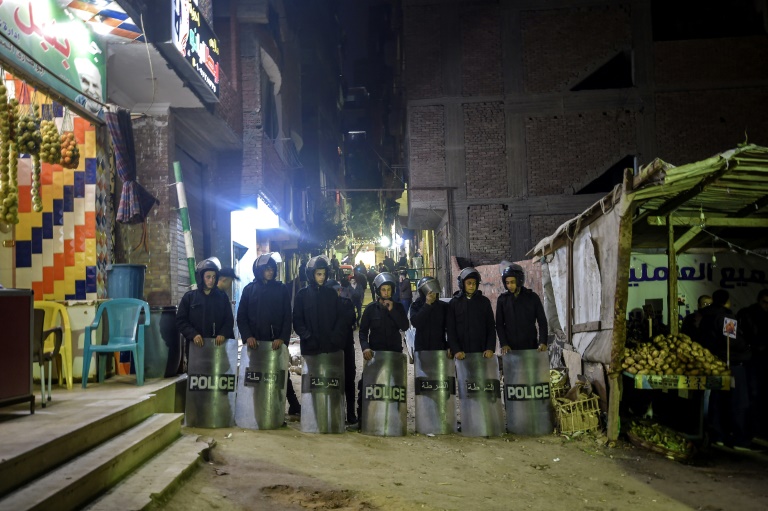 Egyptian security forces guard a street leading in Cairo's eastern district of Nasr City after a policeman was killed trying to defuse a bomb near a church on January 5, 2019 (Photo: AFP)

Egypt's president will inaugurate a massive cathedral on Coptic Christmas Eve Sunday amid heavy security, a day after a deadly bomb blast near a church in a country where jihadists have repeatedly targeted Christians.

There was no immediate claim of responsibility for Saturday's explosion on the eastern edge of Cairo that killed a policeman who was trying to defuse the device and wounded two others.

Coptic Christians, who account for around 10 percent of Egypt's population, have been hit by a string of attacks by the Islamic State group in recent years.

The bomb was hidden inside a bag that was placed on the rooftop of Al-Haq mosque near the Virgin Mary church in the Nasr City district of Cairo, religious officials and witnesses said.

The Grand Mufti of Egypt, Shawki Allam, denounced "the terrorist operation that targeted... the church in the Ezzbat al-Haggan neighbourhood of Nasr City", on his official Facebook page.

He said "extremists" had planted "an explosive device on the roof of Al-Haq mosque... near the Virgin Mary church".

Massad Saad, the son of the prayer leader at the mosque, told AFP he was inside the building when other worshippers noticed "a man going up to the roof carrying a bag" but when they followed him they found "two bags".

"We informed the police," Saad, a 35-year-old baker, said in a phone interview.

There was no immediate confirmation from officials. Government newspaper Al-Ahram reported Sunday that a bomb had been placed in a bag on the roof of a building in Ezzbat al-Haggan, but it did not mention the church or the mosque.

On Sunday morning security forces were deployed around the neighbourhood keeping journalists at bay.

"The targeting of worship places and killing of innocents is a flagrant criminal act that violates teachings of all religions," it said in a statement.

It also voiced its solidarity with state institutions against "terrorism" which it said sought to spoil Coptic celebrations.

Security has been reinforced in Cairo in recent weeks ahead of Coptic Christmas which is celebrated on January 7.

On Sunday evening President Abdel Fattah al-Sisi was due to inaugurate the Cathedral of Nativity in Egypt's new administrative capital, 45 kilometres (28 miles) east of Cairo.

Security forces have been deployed at the gate of the new administrative capital and along the road leading to the cathedral, an AFP photojournalist said.

Access to the place of worship is only to be allowed after passing through at least three metal detecting gates.

Armoured vehicles and more than a dozen ambulances were stationed outside the cathedral which was also encircled by a security cordon.

Sisi often presents himself as a defender of Christians against extremists but activists and some analysts accuse the state of discriminating against them and not providing enough protection.

On Sunday Sisi will join the Coptic pope, Tawadros II, in the cathedral which is touted as the largest in the Middle East.

The president visited the Cathedral of Nativity for Christmas Eve last year when it was still under construction, and gave a short speech wishing Copts a merry Christmas and saying the country would prevail over jihadists.

His attendance on Sunday will mark the cathedral's official inauguration.

The president will also inaugurate on Sunday Al-Fattah al-Alim mosque in the new administrative capital.

More than 100 Copts have been killed in jihadist attacks since December 2016.

IS claimed an assault in early November in which six Copts and one Anglican died in the central province of Minya.

IS also killed more than 40 people in twin church bombings in April 2017, and an IS gunman in December that year killed nine people in an attack on a church in a south Cairo suburb.

Hundreds of police and soldiers have also been killed in attacks.

In late December, three Vietnamese tourists and their Egyptian guide died when a homemade bomb exploded on their bus on the outskirts of Cairo.

The country has been under a state of emergency since April 2017.

In February the army launched a large-scale operation dubbed "Sinai 2018" to rid the Sinai Peninsula of jihadists after an attack on a mosque that killed more than 300 people.