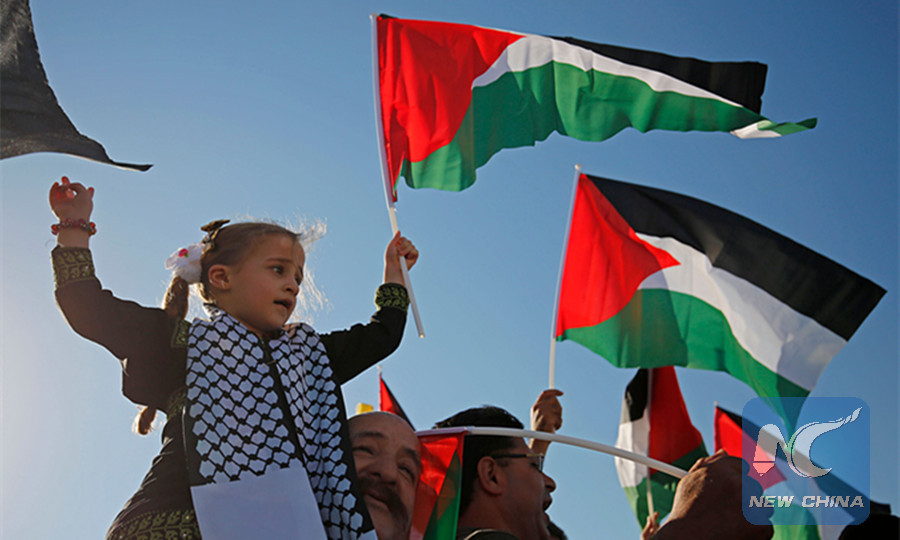 Palestinians wave their national flag as they demonstrate in support of bedouin inhabitants near their village of Khan al-Ahmar, in the occupied West Bank July 18, 2018. (photo: AFP )

CAIRO, July 29 (Xinhua) -- Egyptian President Abdel-Fattah al-Sisi urged on Sunday the Israeli public opinion to make use of an available great chance for peace with the Palestinians.

"I address the Israeli public opinion that there is a great chance for real peace and stability in the region by finding a solution to this issue," Sisi said while answering one of the questions at a two-day youth conference held in Cairo University.

"This solution will not at all be against your security and stability," Sisi said through the televised event.

With regards to circulating media reports about a US - sponsored "Deal of the Century" for a solution to the Israeli-Palestinian conflict, Sisi reiterated Egypt's fixed position that supports the establishment of an independent Palestinian state with east Jerusalem as its capital city based on the pre-1967 borders and the relevant UN resolutions.

"The 'Deal of the Century' is a media term rather than a political one," Sisi continued, "we cannot accept anything the Palestinians do not accept and we support what they accept."

The Egyptian president said that Egypt exerts efforts to achieve inter-Palestinian reconciliation "to have a united leadership for negotiations regarding the Palestinian cause."

The decades-long Palestinian-Israeli conflict has been going on since the Israeli occupation of Palestinian territories and the Western-backed creation of Israel in 1948.

The international community holds Israel responsible for the deadlock of the peace process with the Palestinians due to its settlement expansion policy on occupied Palestinian territories.

Israel is the regional number one ally of the United States. The US President Donald Trump has recognized in late 2017 the debatable holy city of Jerusalem as Israel's capital city despite regional and international uproar.