CAIRO, July 28 -- An Egyptian court on Saturday sentenced 75 members of the outlawed Muslim Brotherhood to death over charges of violence and murder, a judicial source said.

The case, publicly known as "Breaking up Rabaa Sit-in," dated back to 2013. The convicted were charged with causing deaths of policemen, attempted murder and vandalism, the source told Xinhua. 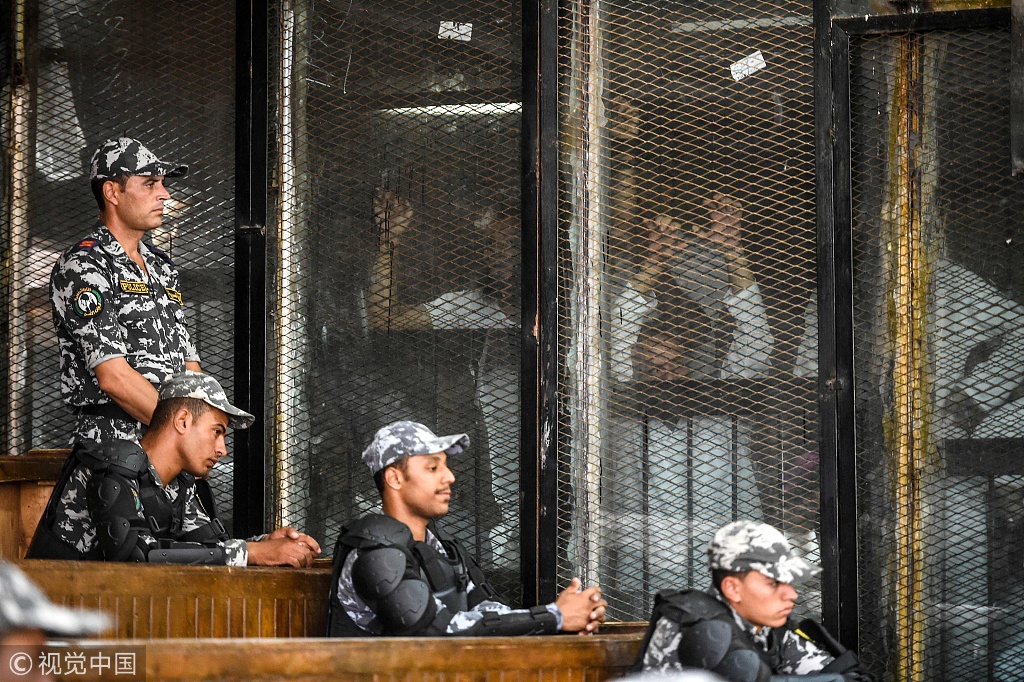 Members of Egypt's Muslim Brotherhood are seen inside a glass dock during their trial in the capital Cairo on July 28, 2018. (Photo: VCG)

The court referred the sentence to Grand Mufti, the country's highest Islamic official who will give the religious judgment of all preliminary death sentences.

The Mufti's opinion is non-binding as it is usually considered a formality.

Rabaa was one of two sites where supporters of the ousted Islamist President Mohamed Morsi gathered in the weeks following his overthrow by the army in July 2013 in response to mass protests against his one-year rule.

The sit-in was dispersed violently by security men, after many warnings by the government. The protesters have been accused of hindering traffic, causing public disorder, terrifying the residents as they possessed weapons.

Morsi's Brotherhood group was banned by the government and most of his group have received verdicts varied from death, to life sentences over violence, killing and espionage.

Morsi is currently serving a 20-year prison sentence over inciting deadly clashes between his supporters and opponents in late 2012 and a 25-year jail term over leaking classified documents to Qatar.

The verdicts can be appealed.

Ahmad Ban, expert with Cairo-based Nile Center for religious movement affairs, and a Brotherhood dissident, said the verdicts could be appealed several times, predicting president Abdel Fattah al-Sisi will pardon several figures including Morsi when if finally comes to execution.

"The pardon will be focused mainly on the Islamists who weren't involved directly in killing security men or civilians," he said.

He added both the country and the Brotherhood group will seek reconciliation, but each side is waiting for more concessions.

Sentencing for more than 660 other Islamists in another case was set for Sept. 8, according to state-run Ahram news website.

Since Morsi's ouster, Egypt has been facing a wave of terror attacks that have killed hundreds of policemen and soldiers as well as civilians.

A Sinai-based militant group affiliated with the Islamic State (IS) regional terrorist group has claimed responsibility for most of the attacks in Egypt over the past few years.

Meanwhile, the Egyptian forces have killed hundreds of terrorists and arrested thousands of suspects during the country's anti-terror war declared by newly re-elected President Abdel-Fattah al-Sisi, the army chief then, following Morsi's ouster.