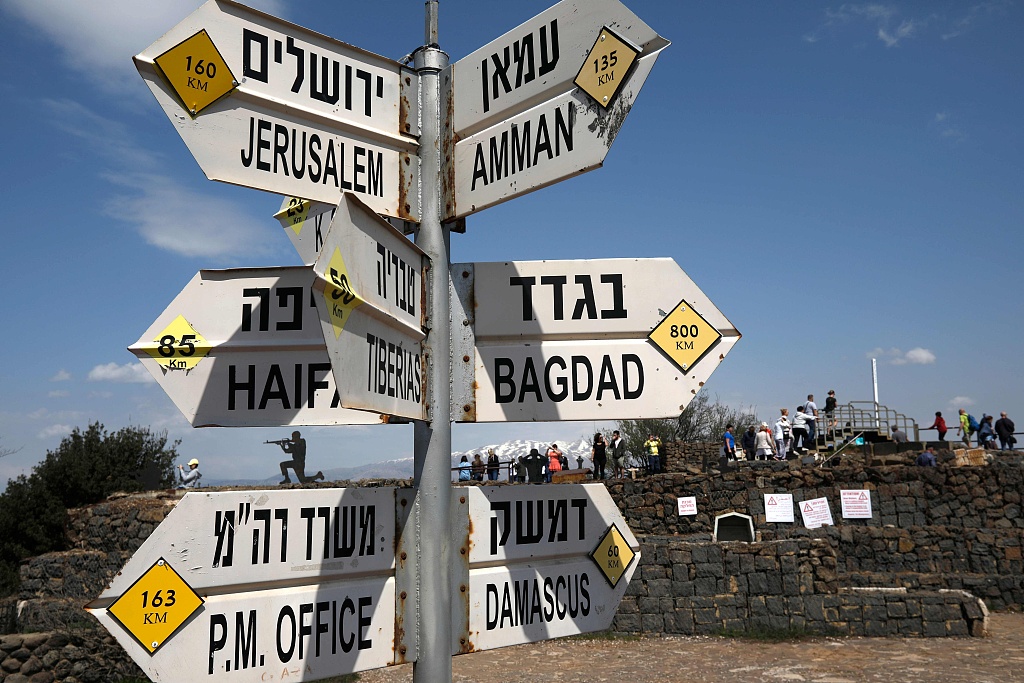 A sign for tourists shows the direction to Jerusalem, Amman, Damascus and Baghdad among other destinations at an army post on Mount Bental in the Golan Heights on March 22, 2019. (File photo: VCG)

"Based on the resolutions of international legitimacy, Israel's impose of its laws and administration on the occupied Syrian Golan is deemed nullified and illegitimate decision," the statement said.

The statement cited the UN Security Council Resolution 497 of 1981 which rejected Israel's annexation of the territory.

Egypt confirms "the importance that everybody should respect the resolutions of international legitimacy and the United Nations Charter in respect of the inadmissibility of acquiring land by force," the statement added.

On Thursday, Secretary General of the Arab League (AL) Ahmed Aboul-Gheit said US President Donald Trump's recognition of Israeli sovereignty over the Golan Heights is "irrelevant and illegal."

The AL completely supports the Syrian rights, noting the US move constitutes dangerous repercussions towards the Israeli-Arab conflict, he added.

Trump tweeted on Thursday that "after 52 years, it is time for the United States to fully recognize Israel's Sovereignty over the Golan Heights, which is of critical strategic and security importance to the State of Israel and Regional Stability!"

Israel seized the Golan Heights in a war in 1967 and annexed it in the 1980s, but the international community has never recognized the move.