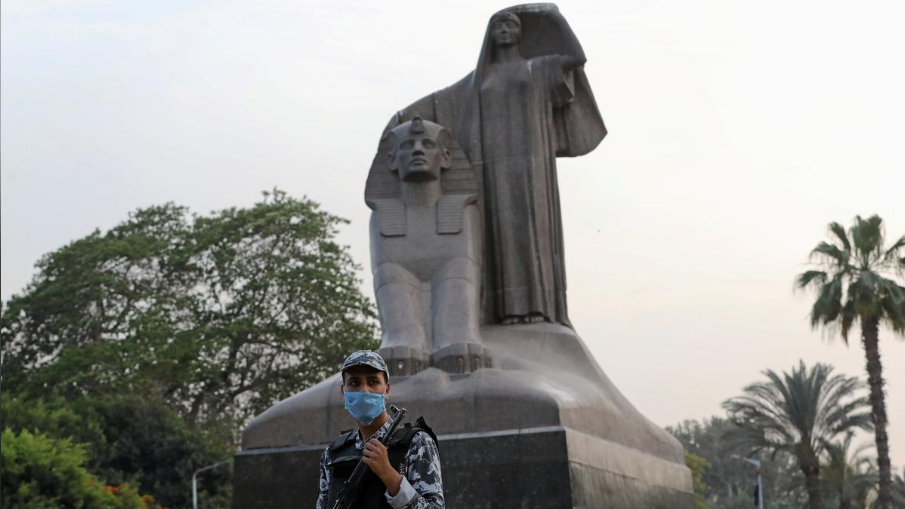 An Egyptian police officer wearing a protective face mask stands guard beside a statue called "Egypt's Renaissance" during Ramadan as Egypt ramps up efforts to slow the spread of the coronavirus disease, Egypt, May 16, 2020. (Photo: CGTN)

Egypt will bring forward the start of its curfew by four hours to 5 p.m. and halt public transport from May 24 for six days during the Eid holiday, as it seeks to curb the spread of the new coronavirus, Prime Minister Mostafa Madbouly said on Sunday.

Shops, restaurants, parks and beaches will be closed for the extended holiday at the end of the holy Muslim month of Ramadan, and restrictions on citizens' movements will remain in place for at least two weeks afterward, Madbouly added.

The Eid is an important religious holiday celebrated by Muslims worldwide that marks the end of Ramadan, celebrating the conclusion of the 29 or 30 days of dawn-to-sunset fasting during the entire month of Ramadan.

Egypt has so far reported 12,229 confirmed cases of the novel coronavirus, including 630 deaths, according to Johns Hopkins. The daily tally of cases has been rising after the government slightly eased a night curfew and other measures. The number of cases rose by 510 on Sunday, the health ministry said.

Madbouly suggested there could be a gradual reopening of some venues including sports clubs and restaurants from mid-June. A reopening of places of worship would also be considered.

Anyone entering enclosed spaces with other citizens or taking public transport will be required to wear a mask, Madbouly said, adding that the government was working on producing washable masks for general use.