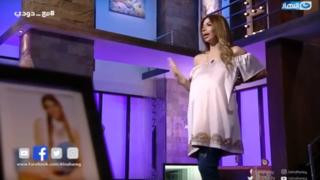 Doaa Salah dressed to appear pregnant when she addressed single motherhood on her show. Photo:Al-Nahar TV

An Egyptian court has convicted a female TV presenter of inciting immorality for offering on-air advice to women on how to be single mothers, sentencing her to three years in prison.

The imprisonment of presenter Doaa Salah of the privately owned An-Nahar network was suspended pending her appeal and she remains free. Her bond was set by the court at 10,000 Egyptian pounds (about $570).

Salah's comments were made in July, when she counselled women to enter bogus, for-cash marriages to get pregnant and then quickly divorce, or to seek artificial insemination using anonymous donors — methods seen as highly objectionable or immoral by Egypt's mostly conservative society.

Salah appeared in that segment of her program showing a fake pregnancy belly.

The Cairo court's ruling was passed earlier this week.