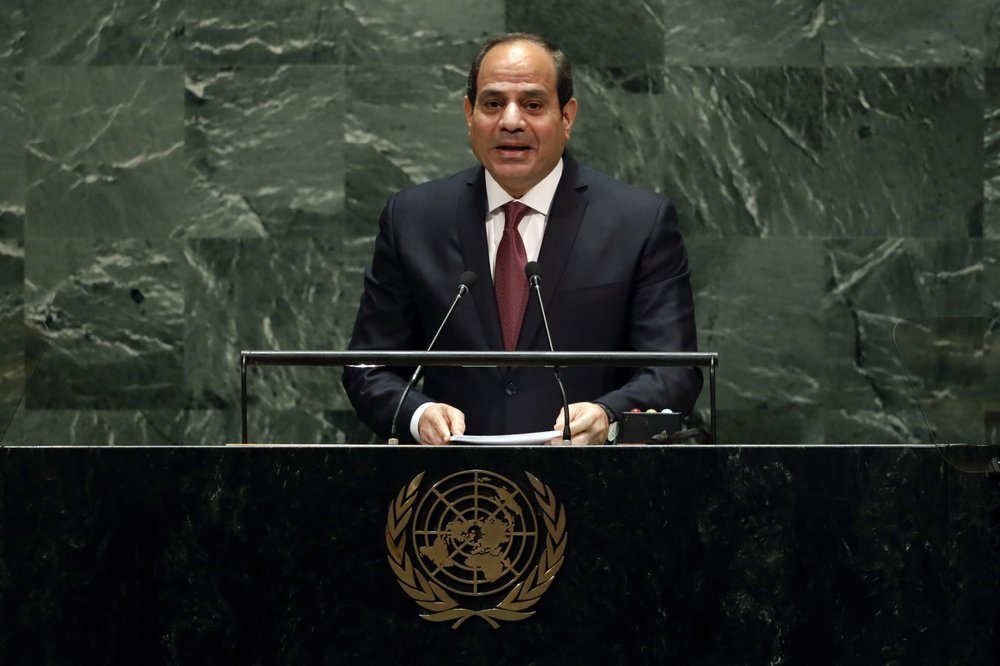 Egypt’s president Wednesday called for “decisive” and “collective” action against countries supporting “terrorism” in an apparent reference to Turkey and Qatar, who back the Muslim Brotherhood group, which is outlawed in Egypt.

Addressing a two-day forum on peace in Africa in the southern city of Aswan, Abdel-Fattah el-Sissi also said achieving sustainable development in Africa is needed, along with efforts to fight militant groups in Egypt and the Sahel region that stretches across Africa south of the Sahara Desert.

“There should be a decisive response to countries supporting terrorism and a collective response against terrorism because the terrorist groups will only have the ability to fight if they are provided with financial, military and moral support,” he said.

The gathering in Aswan was attended by the leaders of Niger, Chad, Nigeria, and Senegal along with officials from the US, Britain, and Canada.

The Sahel region is home to al-Qaida and Islamic State group-linked militants. El-Sissi said Egypt could help train forces and provide weapons to countries in the region to fight extremists.

Egypt has for years been battling an Islamic State-led insurgency that intensified after the military overthrew an elected but divisive President Muhammad Morsi in 2013, a member of the Muslim Brotherhood, amid mass protests against his brief rule.

Militant-related violence in Egypt has been centered on the Sinai Peninsula, as well as in the country’s vast the Western Desert, which has witnessed deadly attacks blamed on militants infiltrating from neighboring Libya.

Since Morsi’s ouster, tensions have grown between Egypt and Turkey and Egypt and Qatar. The political party of Turkish President Recep Tayyip Erdogan is an offshoot of the Muslim Brotherhood, which Cairo designated as a terrorist group in 2013.

El-Sissi also said a “comprehensive, political solution would be achieved in the coming months” for the conflict in Libya, which descended into chaos after the 2011 civil war that ousted and killed long-time dictator Moammar Gadhafi. He did not elaborate.

He said that would put an end to a “terrorist hotbed that pushes militants and weapons to (Libya’s) neighboring countries including Egypt.”

El-Sissi apparently was referring to an international summit in Berlin that aims to reach an agreement on actions needed to end the conflict. The conference had been scheduled for October, but it has apparently been postponed.

After the 2011 civil war that ousted and killed long-time dictator Moammar Gadhafi, Libya descended into chaos and split in two, with a weak UN-supported administration in Tripoli overseeing the country’s west and a rival government in the east aligned with the Libyan National Army led by Gen. Khalifa Hifter.

Greece, Egypt, and Cyprus, which lie between the two geographically, have denounced the deal as being contrary to international law, and Greece expelled the Libyan ambassador last week over the issue.

Hifter has for months been fighting an array of militias allied with the Tripoli authorities to wrestle control of the capital. He is backed by the United Arab Emirates and Egypt, as well as France and Russia, while the Tripoli-based government receives aid from Turkey, Qatar, and Italy.